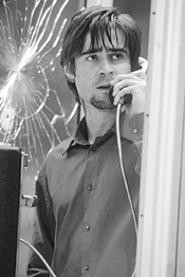 A man, peering through the scope of a sniper's rifle muffled by a silencer, holds hostage someone he considers an evildoer. They communicate via telephone: The sniper insists that if his prey disconnects for any reason, he will shoot to kill. To prove he is serious, and not merely a lunatic who dialed the wrong number from a distance, the gunman will, with silent precision, shoot innocent bystanders who are crowded around the target. All the sniper wants is for his quarry, a glib slickster who conducts bad business and dreams of sleeping around on a spouse, to confess to past sins -- to admit to being a bad person capable of callous and cruel behavior. Judges who don the executioner's robe usually get what they want, be it a sniveling target cowed into confession or a bullet-riddled corpse who's got nothing left to say.

Such is the plot of Liberty Stands Still (you were expecting, oh, Phone Booth?), a never-released, direct-to-DVD Lions Gate film scheduled to appear last year, in which Wesley Snipes holds Linda Fiorentino hostage from a distance after forcing her to chain herself to a hot-dog stand. Snipes's Joe, an ex-CIA operative, blames Fiorentino's Liberty, a gun manufacturer, for making and selling the rifle someone used to gun down his little boy. To make his (gun)point, Joe turns one of Liberty's own firearms against her, which is about as subtle as a pistol-whipping or Michael Moore -- but at least Joe has more motivation for his itchy trigger finger than Kiefer Sutherland in Phone Booth, which bears more than a passing resemblance to Liberty Stands Still. Maybe Lions Gate should retitle its doomed project Food Cart and see if it can sweep up some loose change by, at the very least, confusing audiences.

Not that there's much to either film. Somebody's got a gun, somebody else is trapped in place for the better part of 80 minutes (Colin Farrell, in this case, not to mention you), the cops show up, people get picked off, and just maybe the protagonist will learn what it means to be a better person. Think of Phone Booth, directed by Joel Schumacher from a story idea that's been making the rounds since Hitchcock was alive, as a radical remake of Regarding Henry: It takes a bad thing to make a callous man good and whole and pure, which is what passes for therapy in the movies.

Phone Booth, delayed till Fox thought it in good taste after the sniper killings of 2002, really plays more like a sick joke, the director's revenge on publicists. (He nearly admitted as much during an interview two weeks ago.) It's his Sweet Smell of Success, with Farrell in the Tony Curtis role as Stu Shepard, the unctuous grubber who will sweet-talk bad clients (everyone's his fave) and lie to columnists to get his no-talents a cheap mention in the tabloids. Farrell, barely concealing his Irish brogue beneath a New Yawk blurt, walks fast, dresses flash, talks loud, and treats underlings like something stuck to his shoe. Stu's got a wife at home (Radha Mitchell) and a fantasy girl on the side (Katie Holmes, who I believe is every man's dream date), but loves no one as much as himself, which is why Kiefer Sutherland's heard-but-never-seen sniper picks him as prey. Sutherland's "Caller" believes Stu to be "guilty of inhumanity to others," like the pornographer and corrupt CEO he's also assassinated.

That Stu's more a selfish annoyance than perpetrator of evil deeds is but one reason you never buy the premise, which sort of kills the gimmick; when you're sitting there wondering, "Why Stu?" and told only, "Why not," well, you've got as much invested as an American Airlines stockholder. And really, the movie's nothing more than a stunt -- so much so, a narrator has to explain to us, at film's beginning, that some people still use the phone booth at 53rd Street and 8th Avenue, "the last vestige of privacy on the West Side." (The movie was actually shot in Los Angeles.) Then you have to buy the fact Stu always manages to make it to the same booth at the same time every single day, so he can call Katie H. It's just as a colleague says: Phone Booth is one of those movies where, if just one character acted as a real person would -- say, if Farrell just hung up the phone and ducked into the nearest shelter -- the whole thing would crumble to dust.

Schumacher, the man who killed Batman, at least made the movie quickly and cheaply -- it's not much of a waste of time or money, so it has that going for it. And every now and then, you are suckered into its stunt -- maybe because Farrell's charismatic enough to hold your attention, when Sutherland's not droning on and on and trying to divert it. And Forest Whitaker's amusing as the cop who won't shut up about his marital problems and what he learned in therapy (and there it is). But the movie's so hung up (pardon) on its gimmick, it never transcends it; might have been better had Kiefer called Moviefone.