Sophisticated food, attentive servers, a gorgeous setting . . . We are in Cleveland, right? 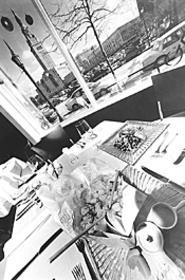 Long after the tastes of lobster and steak have faded, and the aromas of truffle oil and pancetta have become but distant memories, what we'll remember about XO, Zdenko Zovkic's new addition to the Warehouse District dining scene, is likely to be this: the sheer radiance of candlelight and Christmas lights, washing across snowy white walls, illuminating the forms and faces of beautifully dressed dinner guests, and turning the entire room into a vignette posed inside a life-sized, glistening snow globe.

It was one of those fleeting moments when everything -- the midnight-blue sky framed in the arch of tall Palladian windows, the sparkle of delicate stemware, and the spontaneous choreography of handsome young diners -- came together in a vision almost too perfect to endure. That it occurred not in Miami, New York, or Las Vegas, but right here in our own little city . . . well, Zovkic has a lot to be proud of.

Stylish as XO may be, though, the young Zovkic (a native of Germany and himself a suave addition to the decor, with his neatly trimmed beard and well-tailored suits) has made sure that it is also a place of substance. For this, he has handed over the kitchen to talented executive chef Scott Popovic, a North Olmsted native and graduate of Johnson & Wales's culinary program, whose experience has taken him from Moxie and the Riverview Room at the Cleveland Ritz-Carlton to Las Vegas's Aureole and Nine.

Popovic's upscale lunch and dinner menus are pure sex appeal, full of trendy, tantalizing phrases such as "foie gras," "porcini foam," and "mascarpone polenta cake." Sometimes there's a Mediterranean flare, as in beef carpaccio, or bruschetta topped with olive tapenade. Sometimes there's an Asian accent, notably in the tuna tartare with wasabi. Other times, there's a Nuevo Latino beat, found in taste-teasing duck-confit tacos with corn-and-black-bean salad. But regardless of their ethnic origins, most of these creations have one thing in common: They emerge from Popovic's kitchen as tightly composed, contemporary show-stoppers, infused with flavor and presented with charm and wit.

An evening starter of lightly battered rock shrimp was a perfect case in point, arriving at the table in a Chinese carryout box complete with chopsticks and accompanied by dipping portions of zesty chile sauce and mousse-like lemon aïoli. Not only was the presentation unexpectedly clever, but the shrimp themselves were bite-sized marvels, practically bursting with juicy freshness inside a batter so vaporous, it threatened to float all the way up to the high tin ceilings.

At lunch, the chef coaxed a chuckle out of that old midday workhorse, the triple-decker club sandwich, by smartly reimagining it for hipster palates. Out went dreary old turkey, for instance, and in came glistening chunks of lobster meat. Out went ho-hum lettuce, and in came a tangle of microgreens. Tomato and bacon were allowed to stick around, but not without the addition of sleek avocado salsa, which lent the sandwich an au courant brightness. But forget about that boring white-bread toast: It was replaced by thick slices of butter-drenched challah, grilled until crisp-edged and smoky.

Although servers come around with the requisite pepper mills, salt shakers are notably absent from XO's well-dressed tabletops, and in the face of Popovic's skillful seasonings, our bet is that diners won't even miss them. Yet for as much taste appeal as the chef packs into almost every dish, he also understands that less is more: Flavor enhancers, ranging from shallots and fresh herbs to truffle oil and foie gras, are intelligently applied, so that they caress, rather than clobber the main ingredients.

The kitchen's ability to strike the ideal balance between natural flavors and high-octane add-ons was vividly displayed in one Saturday-night special, a 14-ounce Certified Black Angus strip steak, served on a neatly arranged bed of pan-roasted, rosemary-tweaked red-skinned potatoes and big al dente Brussels sprouts, washed in a delicate, honey-water glaze ($38). It was obvious that the heavily marbled steak had been robustly seasoned in the kitchen with salt, pepper, and herbs, and that it was tender enough to cut with a fork. But what really rocketed the dish into the stratosphere was the scant drizzle of truffle-and-foie-gras demi-glace that ringed the plate: just enough to add an exotic grace note to a dish that would have been delicious even without it.

In fact, the kitchen demonstrated repeatedly that it could hit the taste-target without risking overkill. Consider the savory filet of salmon, roasted to a succulent medium rare, and nestled on a luscious ragout of cannellini beans, pancetta, and bits of green and Napa cabbages. Even the final garnish, a cherry-red tangle of sweet, fried beet threads, was innocently rustic, helping anchor the dish firmly at the intersection of the earthy and the urbane.

From the lunch menu, duck-confit tacos were equally compelling, bringing together savory shredded meat with a bit of chopped tomato and smoky, melted mozzarella inside a plump, tender cornmeal tortilla. Seasoned with cilantro and a bit of chive-infused crème fraîche, and served with a roasted-corn-and-black-bean salad, this simple yet sophisticated dish conjured memories of favorites from Chicago's Frontera Grille.

(And do indulge yourself in XO's glammed-up version of the humble French fry -- cut into pliant threads, infused with truffle oil, and finished with thick shavings of Parmesan cheese!)

A handsomely presented half-and-half combo of black-bean and cannellini-bean soup de jour -- the dark soup confined, as if by magic, to the left side of the tall-sided, rectangular bowl, while the light soup occupied the right -- turned out to be one of the few times that the kitchen missed its mark. Almost thick enough to pass for bean dip and with no particular flavor beyond a distinct saltiness, the soup lacked what in music might be called "dynamic range." We weren't impressed with the mushroom ravioli, either: While the dumpling itself was delicate and tender, an alleged porcini "foam" was more like brown sauce and made a clumsy companion to the dainty pasta pocket. Still, who knows? In a less impressive ballpark, these two little bench-warmers might have seemed like heavy hitters.

Certainly, the redecorated interior of what used to be the Greek Isles has scored a homer. Like many of the other vintage buildings in the Warehouse District, this soaring space on the corner of St. Clair Avenue and West Sixth Street has great bones, and Zovkic has shown them much respect. Old tin ceilings are painted a warm café au lait. White wainscoting outlines walls now cloaked in the color of a Godiva chocolate truffle. And a white-upholstered banquette, along an exterior wall, has been custom-designed to highlight the floor-to-ceiling windows, so not one bit of the view is wasted. Factor in an abundance of pale, pudgy candles, a symmetrical wall grouping of wood-framed mirrors, some ultra-contemporary European pendant lamps, and a set of streamlined shelves holding orchid-filled vases, and the airy space -- three dining rooms and a lounge -- captures the kind of warm, stylish urbanity heretofore best expressed in the pages of our beloved Pottery Barn catalog.

At both lunch and dinner, service was prompt, well-paced, and attentive. Emptied plates never lingered, water glasses were refilled after practically each sip, and tables were crumbed religiously by staffers who were focused and friendly. If anything, perhaps they were a little too friendly. At least, that's what we thought when our dinner waiter took time out of his busy schedule to critique our food and drink. First, he sniffed rather conspicuously at our diminutive bottle of Feuillatte Brut Champagne ($16 for a split, chosen from the small, distinguished international wine list) before announcing that it smelled good; later, he stopped to assure us that our dessert -- a lovely lemon torte, filled with Chantilly cream and garnished with fresh berries and an orchid -- "tastes better than it looks!" At times like these, a companion and I agreed, a diner simply doesn't know whether to laugh or cry . . .

Depending on whom you believe, XO is shorthand for either "extra old" or "extra-ordinary," and is used in reference to top-shelf brandies, such as Courvoisier's XO Imperial Cognac. Aged between 25 and 35 years in French Limousin-oak casks, the Courvoisier has been called "voluptuous," "elegant," and "subtle." Even at this early stage in its development, much the same can be said of XO, the restaurant.