Year of the Coma 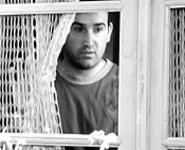 It's been nearly three years since Pedro Almodóvar's All About My Mother won the Oscar for Best Foreign Language Film. Perhaps it's in the spirit of spreading things around that Spain has not nominated Almodóvar's latest, Talk to Her, as their entry this year. It's hard to imagine any other reason to pass over this extraordinary film; if there's another Spanish production out there that's better, this is a landmark year for that country's cinema.

Almodóvar's movies usually have female protagonists who provide the narrative's point of view, but Talk to Her is an exception. It sticks rigorously to its masculine characters -- so much so that the two most important female characters spend most of their screen time literally comatose.

Despite that, Talk to Her is, in tone and structure, immediately identifiable as Almodóvar. Its first shot announces its pride in artifice: A curtain rises on a ballet performance, but in medias res and in tight close-up, making it clear that this is the curtain for the film, not the dance.

Within the story of the dance, two women fall -- a symbolic teaser for what is to come. Watching this from the audience, and weeping, is Marco (Darío Grandinetti); watching Marco cry, and strangely moved and intrigued, is Benigno (Javier Cámara). At the third remove, drawn into the unexplained emotions, we watch them both.

Cut to a hospital room, where Benigno is describing the ballet to the beautiful Alicia (Leonor Watling), a dance student who lies comatose in a bed. He isn't just running his mouth; as her nurse, he believes that it is crucial therapy. "You have to talk to women," he later tells us. "They like that." He is convinced that even an apparently brain-dead accident victim like Alicia can, on some level, hear and be cured.

A few months later, Marco and Benigno meet again under the worst circumstances: a hideous mishap has put Marco's current love, Lydia (Rosario Flores), into a coma as well, and she resides down the hall from Alicia. Surprisingly, the two men become friends, though, outside of the coincidence of the situation, they seem to have little in common. Marco is "normal" -- a man of the world, a brooding, decidedly masculine journalist. Benigno is "strange" -- a thirtyish virgin, who has spent most of his life waiting hand and foot on his mother. Being a mama's boy and a male nurse, he is assumed by many to be gay, but in truth he's not quite sure what he is.

Almodóvar leaps around in time to show us the backstories of both men. We learn that Benigno's attachment to Alicia isn't merely professional. For a period before her accident -- while mourning his mother's recent death -- he observed her from his apartment window as she attended the dance school across the street. He fell in love, in his fashion, and tried to make contact, but his cocooned life had rendered him socially inept.

Alicia's accident is like the fulfillment of an unconscious wish: Her misfortune allows Benigno to relate to her in the only way he knows to deal with women. As with his mother, he gets to devote his life to looking after her. Awake, she was justifiably creeped out by his approaches to her; comatose, she is utterly accepting.

The time leaps are sometimes, but not always, announced by onscreen titles; they occasionally leave us briefly confused as to whether we are seeing a memory, a dream, or a waking fantasy. In some films, this would seem a manifestation of sloppiness on the filmmaker's part; but Almodóvar is clearly in control here, leaving us up in the air only as long as he wants to.

And sometimes what we see is a hybrid of memory and fantasy: One of the film's most important sequences is parody/re-creation of a silent film, as described by Benigno to his unconscious love. Like much of Talk to Her, it is simultaneously hilariously funny and, once we discern its full meaning, disturbing and heartbreakingly poignant.

This sequence is almost a distillation of what makes Almodóvar utterly singular: No one can blend melodrama and heightened emotion with laugh-out-loud wackiness the way he does. His only likely precursor is Buñuel, who similarly presented the weirdest material in a deadpan manner.

Once or twice in Talk to Her, we glimpse a copy of Davis Grubb's novel Night of the Hunter lying about, with an image from Charles Laughton's 1955 movie on its cover. That film's P.O.V. and surreal style gave it the feel of a fairy tale -- Hansel and Gretel brutally dropped into Appalachia.

Similarly, Talk to Her is something of a contemporary gloss on Sleeping Beauty. Even more than usually for Almodóvar, it feels like an adult fairy tale, with an indefinable sense of the magic that both wondrously and hideously lurks beneath everyday reality.