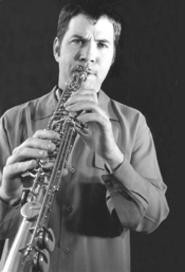 When Chris Jonas, a gifted and original avant-garde soprano saxophonist and composer, performs at Inside in Tremont this week, local musicians will be backing him up. The band will include alto saxman Aaron Ali Shaikh, tenor player Josh Smith, bassist Kurt Kotheimer, drummer Scott Davis, and guitarist Dan Dockrell. Some of these instrumentalists are already laudable by national standards, others on the verge of being so.

Having worked with jazz artists such as William Parker, Anthony Braxton, Cecil Taylor, and Butch Morris, the New York-based Jonas has impressive credentials.

"I'm enthusiastic about being in Cleveland," says Jonas, who is currently leading the group the Sun Spits Cherries. "I graduated from Oberlin College. I've often been in Northeast Ohio since and have developed an affection for Cleveland. As a composer, I'm always excited about working with a new community of players, especially given the ability and creativity of this specific group."

Jonas was born in Laguna Beach, California, in 1966. In high school, he played saxophone and composed, painted, and did some creative writing. Jonas attended Oberlin from 1984 to 1988, switching his major until he arrived at a combined program of art history and painting and minored in music, focusing on the relationship between music and the visual arts.

"The off-campus music scene was incredibly vibrant, because of Oberlin's mixture of conservatory and liberal arts programs and the student experimental music scene," he says. "I was still trying to juggle the different artistic tendencies within myself."

After college, Jonas moved to San Francisco to pursue painting and discovered a community of like-minded artists there.

"I found myself falling into a circle of musicians who were composition master students at Mills College, where Anthony Braxton was one of the primary mentors," he says. "For me, being exposed to improviser/composers who worked in a community setting encouraged me to focus my creative efforts full time on music. Music has the ability to be so mutable, abstract, and rethinkable. The visual arts tend to create an environment in which interpretation is too much of an issue. Abstract painting, for example, tends to evoke literal interpretations, such as landscapes or faces. Music, however, though capable of fully engaging the imagination of listeners, can work in totally nonliteral realms and therefore is capable of balancing the emotional and the imaginative -- suspending any kind of singular concrete experience."

Once Jonas decided to make a career of music, he moved to New York in 1991 and studied at the New School for Social Research and the Mannes College of Music, where he studied composition and theory with Robert Cuckson, who introduced him to "the intricate inner workings of Stravinsky, Webern, Stockhausen, Xenakis, Ligeti, and other European 20th-century masters." At that time, he also met bassist William Parker in what is now known as the Vision Festival of improvisers. There, Jonas worked with Parker, percussionist Susie Ibarra, alto saxmen Ori Kaplan and Rob Brown, and tenor player Assif Tsahar, with whom he still plays. He became a member of Parker's Little Huey Creative Music Orchestra, and recorded and toured with the ensemble. Shortly thereafter Jonas started playing with Cecil Taylor.

"The thing I learned from Cecil was the affinity between intense structure and intense expressionistic fire," he says. "Cecil stands on the brink of the known and unknown. When you play with Cecil, you have to stand clear-eyed under the waterfall or fall into chaos."

Jonas had played with Braxton in the Bay Area, but didn't start working with him in earnest until 1997, when he became a member of his ensembles and a vice president of his Tri Centric Foundation, which is the presenting body for Braxton's orchestra and opera work.

"Braxton is a brilliant musical scientist, a modern-day composer/improviser hero of complex 20th-century music," Jonas explains. "With him I've had many opportunities to conduct orchestras and other large ensembles. He's been a great mentor and active supporter of my musical development."

Jonas's compositions on his CDs Ensembles Unsynchronized and The Sun Spits Cherries, as well as the Great Circle Saxophone Quartet's Child King Dictator Fool, reflect his varied influences, including Webern, John Cage, Morton Feldman, and Braxton. His writing is economical and has a pointillistic quality. He uses canons frequently, including free canons, during which the timing is left up to the individual musicians.

Jonas is interested in using strong melodies as a structural element, manipulating them in various ways. He likes to play them forward and directly afterward backward, and to repeat -- i.e., "echo" them. He enjoys writing atonal but melodically logical themes. And he employs what he calls "arrays," which are mode-like, but change from octave to octave, creating a variety of changing colors. This creates a working environment for him that's both complex and stable.

"Later we discussed the creative music scene in Cleveland, and he seemed interested in coming out here, so I got hold of Birth's Josh Smith, and Josh set up the date," Shaikh explains.

A very important member of Jonas's ensemble will be drummer Scott Davis, who came here originally to play with Ernie Krivda.

"The thing about the creative music scene in Cleveland is that, more than anyone else, Scott Davis is responsible for it, the driving force," he says. "He educated and inspired us to get into the music."

Davis himself looks forward to working with Jonas.

"The experience of playing with these musicians," he says, "is going to be worthwhile, because it's going to reflect the essence, the scope of each musician's individuality -- this being very important to me, with so much music being directed by preconceived traditional and notational forms."

Over the past year, there have been several highly successful appearances of avant-garde improvised music in Cleveland by visiting artists, including Tim Berne, Chris Speed, Joe Maneri, and the Other Quartet. Jonas's will almost surely be as memorable.