Your Place or Mayan? 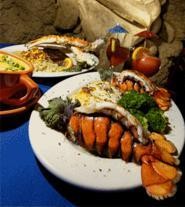 Like language, American cuisine has regional dialects, based on local history, ethnicity, and indigenous foods. From a food-lover's perspective, the happy consequence is an entire country full of unique, regional eateries, featuring everything from she-crab soup in Charleston to perch and pierogies along the North Coast.

Like signposts of particular places and memorable times, those regional restaurants help give life its zing. It's just the opposite of dining in a chain restaurant: Whether in Pittsburgh or Peoria, once you've settled inside a booth at your Friendly Neighborhood Olive Lobster, you could be anyplace -- or, more properly, no place at all -- with food and decor that tell you nothing about your actual context.

So where, then, to file the five-month-old Vhooda, a Mayan-themed restaurant in Middleburg Heights with an all-American menu of steaks, seafood, pasta, and burgers? Do we celebrate it because it's independent, locally owned, and operated by restaurateur Pat Potopsky? Or do we grouse because it's as completely removed from time and place as any Olive Lobster in the country? (Not surprisingly, Potopsky reports he is hoping to franchise the Vhooda concept.)

Take that whole quasi-Mayan thang, for example. The oversized masks flanking the front door look Polynesian; the steel-drum music playing in the background is Caribbean; and at least a few of the artifacts hanging on the wall seem to be African, but okay -- this is entertainment, not Ethnology 101, and authenticity isn't a requirement. But wait, there's more: the made-up name ("Vhooda, God of Feast"), the rambling "backstory," and the "immersive themed environment" from local artist Mark Klaus, rife with hanging vines, faux-stone carvings, and dim, flickering sconces. All this artifice, for what? So we can pretend we're tucking into our steak inside a "lost temple" in the Central American rainforest, instead of a former Cooker's in the middle of a suburban shopping zone? Puh-lease. Then again, instead of kvetching, maybe we should be thanking Vhooda that the designers decided to forgo the venomous snakes and poisonous tree frogs.

Also fortunate, servers get to don tropical-print shirts, not loincloths, and are more likely to be toting trays of expensive, fruity cocktails than dart guns. In fact, service is probably Vhooda's strong suit: From the gregarious greeters who throw open the doors to the jolly managers who move from table to table, these guys know the meaning of service with a smile.

For instance, a weeknight manager couldn't have been more pleasant when he brought us our medium-rare rib-eye, a replacement for the tough-as-leather one we had been served. In the hopes of not attracting attention, we hardly ever send food back; but for this inedible hunk of meat, we made an exception. It was a smart move: Along with a brand-new, piping hot baked potato, the replacement arrived in a mere 13 minutes and proved as plush, juicy, and boldly seasoned as its predecessor had been tough and dry.

In retrospect, we should have sent back that night's other entrée too -- an inferior piece of Chilean sea bass. While not obviously unwholesome, the thin filet's stringy, watery texture and bland flavor were a far cry from the expected quality. And at $28, it was no bargain -- especially since the only accompaniment was a pileup of bitter, burnt-tasting, yellowish asparagus. (Warm, crusty bread and cinnamon-honey butter do arrive at every table soon after guests are seated, but $3.99 side salads are strictly à la carte.)

In fact, of four entrées sampled, the best was the least expensive: the Tulum Burger, eight ounces of USDA Choice ground sirloin, grilled medium as ordered and generously topped with bacon and melted blue cheese. "Cajun spices" were also supposed to be in the mix. We didn't taste them, but we didn't care. We were too busy trying to figure out what bacon, blue cheese, and Cajun spices had in common with the ancient Mayan city of Tulum.

(For those keeping score, the fourth entrée was a so-so seafood lasagna, a stackup of pasta, shredded crabmeat, and dryish shrimp niblets in a modest cream sauce. The most riveting part was the side of tender-crisp broccoli.)

Among starters, the meaty lobster bisque was a champ, although battered and fried Yucatan shrimp, slathered in Buffalo-style hot sauce and served with ranch dressing, made a good showing too. But skip the Gator Nuggets. Despite their exotic provenance -- breaded and deep-fried alligator tail -- they were aptly described by our server as "chewy chicken nuggets."

In addition to the nonsmoking dining room, the restaurant also contains a large, energetic, smoking-permitted lounge, serving beer, wine, and signature cocktails made with homemade infusions. Live bands perform most Saturdays and Sundays; DJs are featured on Thursdays and Fridays.

A quintet of desserts includes Key lime cheesecake, tortilla-wrapped and fried banana cheesecake, and dainty banana fritters, served with freshly made caramel sauce and a scoop of cinnamon ice cream.

Not great, perhaps. But for being discovered inside a hidden Mayan temple, it wasn't half-bad.