Slideshow and Concert Review: Slash at the House of Blues

Slideshow Slash at the House of Blues 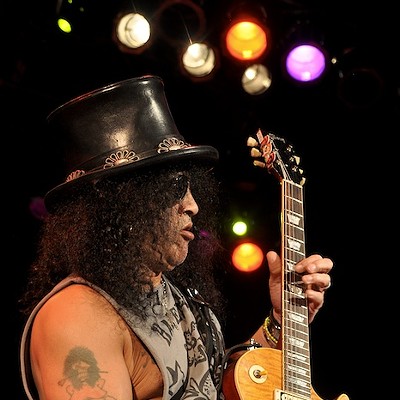 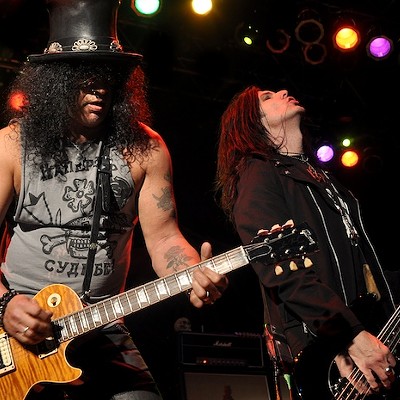 Earlier this year when Guns N Roses was inducted into the Rock and Roll Hall of Fame and Museum, a drama unfolded as singer Axl Rose announced that he wouldn’t perform with the band. Rather than cancelling their performance altogether, the rest of the guys played with Alter Bridge singer Myles Kennedy, a real ringer whose soaring voice was every bit as compelling as Axl’s. Kennedy, who has recorded and toured with GNR guitarist Slash for the past couple of years, was in fine form again last night as he accompanied Slash at the House of Blues for a sold out show.

The show commenced with “Halo,” a track from Slash’s new solo album Apocalyptic Love. The band then segued into the bluesy GNR tune “Nightrain” and that energy in turn carried over to the Slash solo track, “Back from Cali,” which found Kennedy changing a lyric and singing “Cleveland got so much pride.” Decked out in his trademark black hat and sunglasses, Slash barely spoke to the crowd during the show. He wisely chose to let his guitar do the talking and he often hoisted his instrument to the point that it was vertical during his ferocious solos. Kennedy, whose angular features make him look a bit like actor James Franco, was a terrific front man. He didn't banter too much with the crowd and often stood atop the speaker monitors to make himself visible to the packed house. He had no trouble handling the GNR tunes, either as the band’s rendition of GNR’s “Civil War” was spot-on, with Kennedy evoking Rose as he turned "war" into a resounding “waaaar.”

While Kennedy and Slash were in a groove for the entire two-hour set, they really clicked toward the set’s end as they delivered the GNR track “Sweet Child O Mine” and then came back strong on the hard rocking Slash tune “You’re a Lie.” The show concluded with the GNR classic “Paradise City,” which culminated with a blast of confetti and was an appropriate finale to an engaging performance. (Jeff Niesel)