Concert Review and Slideshow: Steve Vai at House of Blues 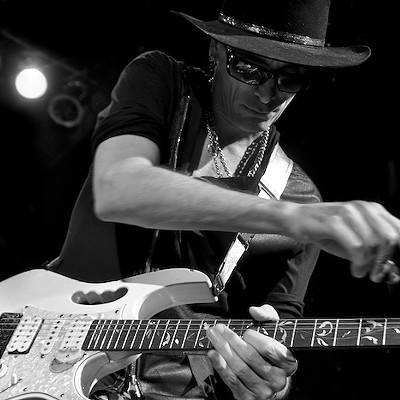 Steve Vai is the hard rock equivalent of a diva. He made that apparent last night at the House of Blues during an extremely flashy two-hour set that featured wardrobe changes and the kind of indulgent soloing you’d normally associate with female singers in the pop and R&B worlds.

Vai, who arrived on stage wearing a wide-brimmed black hat and brightly colored slacks that he said gave him “Prince legs,” admitted the band was playing its fifth show in as many days and confessed he was feeling a bit “slap happy.” That didn’t keep him from shredding away on the three opening numbers from his new album The Story of Light. The flickering strobes only enhanced Vai’s performance, which was the musical equivalent of a high wire act.

Early in the set, Vai turned things over to his guitarist Dave Weiner, whom he said has played alongside him for the past 13 years. Weiner proved to be a more than capable player but his acoustic performance was a real let down after the musical fireworks of the opening songs. Still, it enabled Vai to change his outfit and he stormed back onto the stage to play “Weeping China Doll,” a song that culminated with some intricate fretwork on a 7-string guitar.

When it was time for another wardrobe change, Vai handed the stage over to harp player Deborah Henson-Conant who hammered away at her instrument as if it were an electric guitar, straddling it as if were some kind of horse that she intended to tame. Vai returned for a short acoustic segment before inviting drummer Jeremy Colson to play some kind of percussion contraption that was rolled out to the front of the stage during a segment that reeked of gimmickry.

Setting aside all the theatrics, Vai proved why he’s one of the best guitar slingers in the business. The fact that the venue was packed wall-to-wall with guys only confirmed his unwillingness to make any concessions that would broaden his fan base. Diva or not, you gotta respect the man for having that kind of conviction.