Concert Review and Slideshow: Owl City at House of Blues 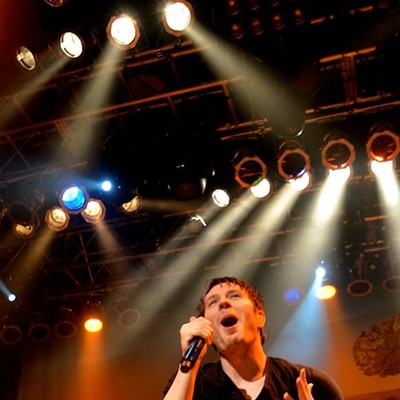 Mid-way through last night’s concert at House of Blues, Owl City front man Adam Young told the crowd that he felt like “an undeserving guy” because he initially never thought anyone would hear the songs that he wrote in his Owatonna, Minn. basement. “I can’t even process this,” he admitted to the audience. While that humility was certainly endearing, it also suggested that the transition from basement to concert club hasn’t exactly been seamless. In fact, Young, who began the show with the jittery “Speed of Love,” a catchy synth-pop number from last year’s The Midsummer Station, danced awkwardly and didn’t appear entirely comfortable as the front man of a four-piece band he had assembled.

And yet, he certainly had the fans in the front row engaged. They sang the lyrics and waved their hands in the air for every number. They didn’t seem to mind that Young telegraphed “I’m Coming After You” — a simple-minded song about chasing after a love interest — with blaring sirens and flashing red lights to mimic the song's theme. Or that he tried a little too hard to bond with the audience by talking about the “Midwest connection” before he played his massive hit “Fireflies.” Young, a guy who’s seemingly gone from laptop wiz to rock star singer in a matter of minutes, isn’t a seasoned performer and that clearly showed. Though his backing band was certainly talented — guitarist Jasper Nephew had an array of effects pedals at his disposal and occasionally unleashed a fierce solo — the group only let loose at the start of the encore as it gave the crowd some time to generate enthusiasm for Young’s return. There’s no question Young can crank out the hits — tunes such as “Gold” and “Good Time” were completely infectious — but he has little stage presence, which perhaps suggests why the venue was only about three-quarters full despite the fact that a number of Midsummer songs have become commercial radio hits.

The most memorable thing about Echosmith’s 40-minute opening set was its singer looks good in a short skirt. She sashayed across the stage like she was at some kind of teen beauty pageant but the songs were devoid of hooks and her lilting voice quickly grew tiresome. Still, the band played a cover of Modern English’s “I’ll Stop the World and Melt with You” with gusto even though it was apparent most of the tweens and teens in the audience had never heard it before and struggled to sing along when band members instructed them to do so.