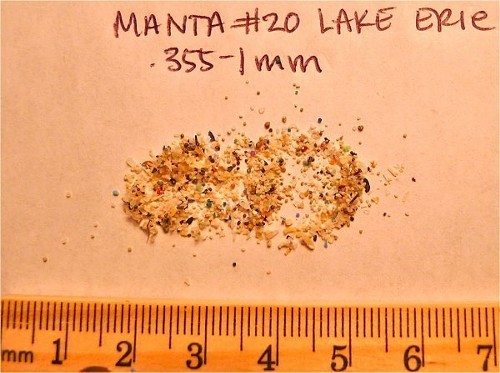 You may recognize this frequently toxic, minuscule debris, known more poetically as “mermaid’s tears,” from previous appearances in the Pacific ocean, the “But daddy I love him!” scene in the Little Mermaid, and the premise of the Garbage Pail Kids franchise.

But it turns out Lake Erie has a so-called “garbage patch” of its very own. It also turns out you may be ingesting plastic byproducts without realizing it every time you tear into a Lake Erie perch sandwich. Scientists at the 245th National Meeting & Exposition of the American Chemical Society—whose Dionysian festivities Scene hopes to rival at tonight’s Best of Cleveland party—presented preliminary findings from the first-ever Great Lakes plastic survey April 9th. Lorena Rios Mendoza, a chemistry professor at the University of Wisconsin who led the study, announced that all of the Great Lakes contain worrisome levels of plastic pollutants, but that Lake Erie was the worst offender.

Mendoza and her team found 1,500 to 1.7 million plastic particles per square mile in the lakes, with the highest concentration in Lake Erie. Unlike the odd used condom or Genesee six-pack yoke commonly found littering Lake Erie’s scenic shoreway, microplastics can be ingested by aquatic wildlife, which are in turn frequently ingested by humans.

"The main problem with these plastic sizes is its accessibility to freshwater organisms that can be easily confused as natural food,” Mendoza semi-confusingly told Science Daily. Which, incidentally, is basically our alibi every time we get caught eating Play-Doh. Sure, eating tiny microplastics doesn’t sound like much of a problem; thanks to the miracles of the digestive tract and the invention of sentient poop by South Park creators in 1997, animal and human bodies usually expertly rid themselves of indigestible “accidentally”-swallowed stuff—butt hair, plastic pellets, razors—with relative ease.

But the microplastics found by Mendoza and her fellow researchers in Lake Erie concentrate toxins known as “persistent organic pollutants,” or POPs, at alarming levels, twice that of similar plastics in oceans. Though Mendoza is only in the beginning stages of testing fish specimens found in the lake for the pollutants, previous research has shown that POPs leech out of plastics and can biomagnify as they go up the food chain, meaning they get more and more hazardous as they pass from fish to human to cannibal.

So where does this shit come from? Standard plastic degradation from litter, often, but also industrial plastic pellets (called “nurdles!” Cute!) and your dirty clothes and douchey high-maintenance facial cleansers, apparently—researchers say that plastic debris contains shedded synthetic fibers from washing machines and abrasive plastic microbeads used in toothpaste and exfoliating soaps. Which absolutely confirms our suspicions that people with great skin and teeth are assholes who hate the environment and punch baby dolphins for fun.