Concert Review and Slideshow: Mindless Self Indulgence at House of Blues 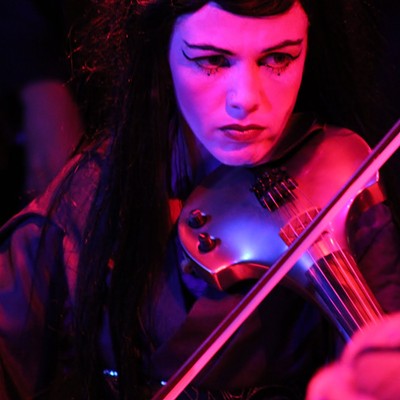 Though 95% of the time they’re careless, Mindless Self Indulgence has carefully tailored itself to be unique and considerably inaccessible. But a packed House of Blues last night would prove that MSI has a strong following regardless - and considering that the crowd was chanting “anal sex” before MSI took the stage, they were definitely on the same frequency as the irreverent band. MSI went in full force at the beginning with “Witness,” with frontman Jimmy Urine doing a mock “hammer dance” around the stage and standing on the bass drum as he sung. Then moving on into the fan-favorite “Shut Me Up,” he did his signature mic-stand baton routine, swinging the mic stand around callously and almost hitting the bassist in the head. The show was riddled with Jimmy’s provocative pelvic movements (kind of like Elvis if he were on meth), and other fun antics, like Jimmy dumping water onto the front row, and grabbing a girl from the crowd to speak the hook of “Never Wanted to Dance” before performing it.

On the instruments aspect of the performance, there was nothing to be impressed by. Guitarist Steve and bassist Lyn-Z weren’t playing remarkably, and drummer Kitty was still drumming to a bare minimum- letting the drum machine beside her do most of the work. Jimmy was very animated on stage, but the downside of this was that there was a few times where you couldn’t quite hear him belting out the lyrics while dancing with the mic in his hand. Jimmy even acknowledged their quality of performance when he commented “that was in the key of shit” after performing “Fuck Machine.” The crowd banter was a strong element of the show, calling the people sitting in the balcony “the Cleveland Elite,” and going on a mini-rant about cyber-bullying before the song “It Gets Worse.” When the crowd cheered exuberantly for him, he snidely remarked, “This is why I have a barricade between us, so you guys don’t try to suck my dick.” And in the middle of the set, he did a five-minute bit where he pretended to talk to Satan on a telephone, to which afterwards he appropriately commented, “when the fuck did we become a professional band?”

Opening for the night was The Red Paintings, which, because they were opening for MSI, was bound to be a unique band. And unique they were. The whole band consisted of a frontman dressed in a skirt and an ushanka (that’s a Russian fur hat for those who aren’t very worldly), a bassist and a cellist dressed as geishas, a violinist dressed in a Lord of the Rings-esque get-up, and a drummer whose face was painted in what could be described as “artsy Juggalo.” But that wasn’t everyone on stage: there was also a painter on stage painting all throughout the performance, and two masked girls undergoing body painting- one of which was actually dancing to the music, while the other just stood still. With all of this happening on stage, it felt like sensory overload, and perhaps took away from the focus on the music, which ultimately wasn’t very impressive. The drummer did give a strong performance, the violinist had some intense solos, and they also did a cover of Tears for Fears’ “Mad World” that was pretty gripping. Near the end of the set, the frontman informed the crowd that anyone who was interested in painting/being painted on during one of their future performances could by contacting them on Facebook, and judging by the amount of self-established weirdos in the crowd cheering, they’ll probably have an abundance of volunteers.

MSI’s setlist for the night:
Witness
Shut Me Up
It Gets Worse
Stupid MF
You’re No Fun Anymore
1989
Issues
Fuck Machine
Never Wanted To Dance
Prescription
Ass Backwards
Eveningwear
Tornado
Ala Mode
Dicks Are For My Friends
Planet Of The Apes
Faggot
On It
Bitches
Straight To Video1