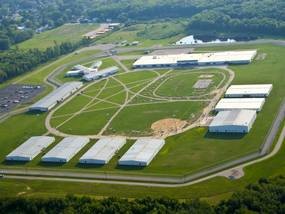 Nestled up against the Ohio-Pennsylvania border, the Lake Erie Correctional Institution strikes a concrete contrast against a springtime blue sky. Warden Brigham Sloan oversees the prison's operations and its 1,798 inmates, all of which fall under the umbrella of the Corrections Corporation of America.

Eighteen months ago, the institution became the first state-owned prison to be sold off to a for-profit enterprise. At $73 million, the transaction was hefty news. It was also unprecedented; no prison in the country had been sold to a private company. Things haven't been going so well since then.

In January, the state's Correctional Institution Inspection Committee stopped out at Lake Erie for an unannounced inspection of the joint. The progress report, which will come with a follow-up investigation in July, "raised a number of significant concerns," according to coordinator Gregory Geisler.

Here's a summary: "Staff interviews, inmate focus groups, the inmate survey, and institutional data all indicate that personal safety is at risk at [Lake Erie Correctional Institution]. Assaults, fights, disturbances, and uses of force have all increased in comparison to prior years. There is a high presence of gang activity and illegal substance use. Inmates reported frequent extortion and theft." The report lays much of the blame at the feet of staff members, who seem to blow off their job descriptions and any oversight authority they have. Problems spark further up the employment chain as supervisors tend not to promote effective training or sound time management.

In essence, shit has gotten out of hand at Lake Erie. And things have gotten worse in the past two years. In categories like assaults, fights, disturbances and use of force, nearly every metric of safety has fallen into damning patterns of neglect.

In 2013 alone, Conneaut police have found themselves tied up with ever more reports of contraband being smuggled into the prison. Also, the prison went into lock-down mode following a Jan. 25 fight involving at least 36 inmates. Many inmates at that time were transferred to the state-owned Richland Correction Institution; one was taken to a nearby hospital with a broken leg. Lastly, news came out in February that the Corrections Corporation of America has been hit with nearly $500,000 in penalties throughout the prior year.

The American Civil Liberties Union of Ohio has been steadily ramping up calls for increased oversight at the prison and scrutiny over the ownership contract.

A recent Toledo Blade editorial points out that "dangerous and inhumane conditions at any Ohio prison will jeopardize [recidivism] progress..." Indeed, any institution falling under the Department of Rehabilitation and Corrections demands a critical eye from government officials and state taxpayers. With a for-profit shadow looming over Conneaut's Lake Erie Correctional Institution, that demand is even more significant.