UPDATE: Richard Dameron, who was sentenced to hold an "I'm an idiot" sign in public all week, hasn't shown up to his post. He told Judge Pinkey Carr today that he was "drunk" and that he "didn't have a ride."

For his oft-cited idiocy, Dameron garnered 90 days in jail (on top of 90 to which he was already sentenced) and a Labor Day weekend stint holding the infamous sign.

Carr said she'd personally pick him up at that point if she had to.

Judge Pinkey Carr, who gained a fair bit of notoriety for her sign-holding sentence last year ("Only an idiot would drive on the sidewalk to avoid a school bus"), has trotted out the unique take on punishment once again.

Richard Dameron, 58, threatened to kill Cleveland police officer Jim Simone and a woman in February. His sentencing will keep him in jail for 90 days, as well as order him to maintain a post outside Cleveland Police 2nd District Headquarters with a Carr-scripted sign: "I apologize to Officer Simone & all police officers for being an idiot calling 9-1-1 threatening to kill you. threatening to kill them. I'm sorry and it will never happen again." ...(sic)

He's slated for 7 to 10 a.m. shifts all week, though he did not show up Monday morning. 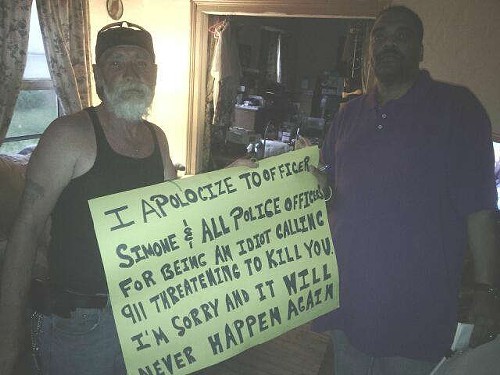