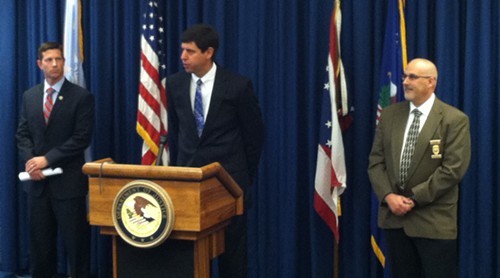 Federal prosecutors and Ashland detectives announced charges against three people who forced a woman and her daughter into "modern-day slavery" for more than a year.

Jordie Callahan, 26; Jessica Hunt, 31; and Daniel Brown, 33, were arrested and charged today with forced labor. A fourth person was arrested, though investigators declined to offer details on that.

"These defendants violated the victim's most basic civil right - freedom - by exploiting her most basic instinct - the protection of her child," says Stephen Anthony, special agent in charge of the FBI's Cleveland office.

In May 2011, the woman with a cognitive disability and her daughter were taken and forced to live in a two-bedroom apartment with Callahan and Hunt, as well as with Hunt's four sons. Hunt monitored the ladies via a baby monitor, and ensured dependence by seizing the woman's government benefits (monthly public assistance).

Until October 2012, they were forced to clean the house, do laundry, shop for groceries, and care for numerous pit bulls and reptiles. They were routinely beaten, and the mother was even forced to beat her daughter on pain of further injury. At one point, Callahan kicked the woman in the hip and later forced her to turn over her Vicodin prescription.

The investigation kicked off in October last year when the woman stole a candy bar to force an arrest. She was taken to jail, where she told officers that she was living with Callahan and Hunt, who were being "mean to her."

"We are yet again reminded that modern-day slavery exists all around us," U.S. Attorney Steven Dettelbach says. "One of our nation's core values is freedom, yet this woman and her child were denied freedom for two years. The victims in this case endured violence, threats, sub-human living conditions and other horrific acts."

Authorities add that the woman and her daughter are recovering now.

The news, of course, comes little over a month after Amanda Berry, Gina DeJesus and Michelle Knight escaped a decade of brutal captivity under Ariel Castro.

It's joyous to announce that these sick bastards are off the streets and behind bars, but, seriously: What the hell is going on?