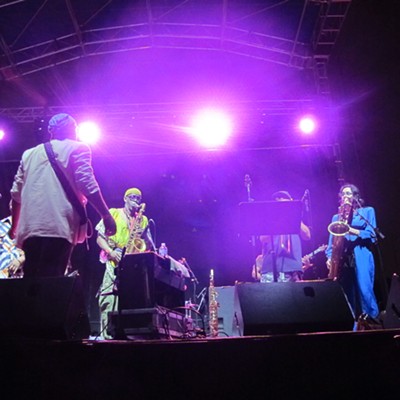 A signature event not just for the Cleveland Museum of Art but also for the city of Cleveland, last night's Summer Solstice concert and festival was another rousing success. The sold-out event started slow with a performance by Colombian harp master Edmar Castaneda who played a pensive solo set for the first part of his hour-long performance but then perked up once he invited his band (which included his vocalist wife) onto the stage. Red Baraat, a groovy horn ensemble out of New York, followed with an energetic set that had patrons dancing and the Burnt Sugar Arkestra, a large funk group, kept things going with a set that included a few choice covers (including the David Bowie tune “Rebel Rebel”). The Crystal Ark, a group headed up by Gavim Russom, formerly of LCD Sound System, finished things off with a set of electro-pop. They brought a group of colorfully dressed dancers on stage, and they nicely complimented the festive atmosphere. While these main acts all played on a giant outdoor stage set up behind the museum, DJs huddled over turntables inside the museums’ atrium and spun dance and hip-hop that had the dancefloor going strong. Afrika Bambaataa closed the night with a set that provided a nice balance of genres, helping Solstice organizers once again prove that loads of fun could be had at the museum after midnight.