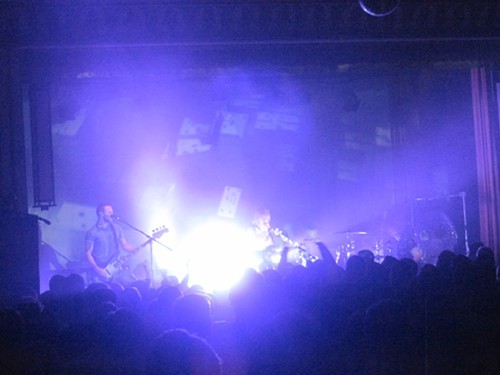 Straight outta Wales, The Joy Formidable has quickly become one of the most intriguing bands touring these days. They've gained a solid reputation following two terrific LPs and a running list of music festivals across the world. Last night in the cozy confines of Beachland Ballroom, the band - singer and guitarist Ritzy Bryan, bassist Rhydian Davies and drummer Matt Thomas - made everyone feel like one big, fuzz-rock-lovin' family.

Opener "Cholla," seemingly the go-to single off the band's new album Wolf's Law, got everyone in the mood for head-throbbing prog shoegaze (or whatever amalgamation you'd like to ascribe). And the band delivered all night. With an utterly insane light show and a simultaneously psychotic and ambient video reel running in the background, the band threw down an impressive night of music with few setlist surprises but many energetic peaks.

A personal favorite - "The Greatest Light is the Greatest Shade" - offered a mid-set buzz for the audience. It's a droning number in the best of ways. The song's signature melody that opens the song is a sure sign of good things to come.

Really, though, each song was a highlight. The band's ability to take each tune's chugging undercurrent and stretch it out into the ether is divine. They ended the set with "The Everlasting Spectrum of a Lie," the first cut off The Big Roar. And they absolutely nailed it.

The encore was really special. "Wolf's Law" bled perfectly into "Whirring," the band's calling card. The crowd ate it up the whole time, and the band members came off eternally gracious for the evening's festivities.

Afterward, a small group formed outside the tour bus to chat with the musicians for a bit. They were all incredibly upbeat and genuine, rattling off perspectives from their hometown - Mold, in Wales - and talking about the roster of summer music fests that lay ahead.

Throughout the show, Bryan mulled over the possibility of returning to Cleveland sometime later this year. While unlikely, it's a nice though. Either way, The Joy Formidable *will* return to Northeast Ohio sometime, and you'd do well to catch a ticket and hit the show.