Weird Al concert at Cain Park was quite the spectacle 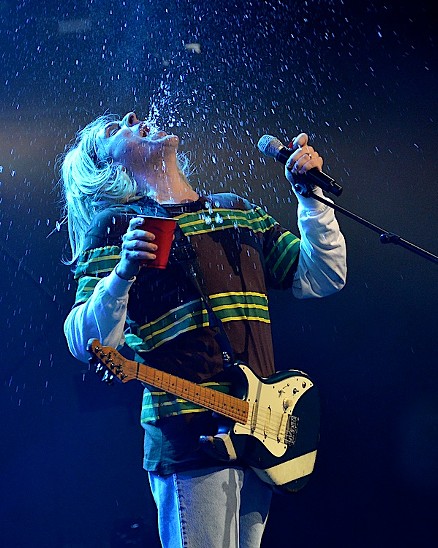 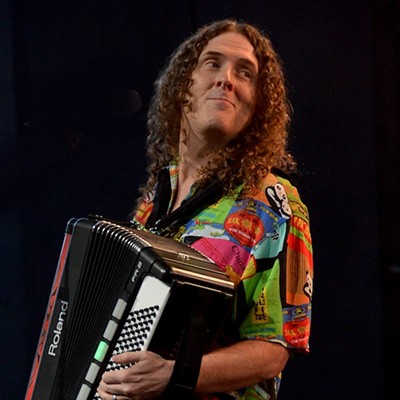 Weird Al knows how to put on a show. During a two-hour concert last night before a capacity crowd at Cain Park, the satirist did a bit of everything. He changed into a countless number of different outfits and played funny, home-made videos in which he took clips of celebrity interviews and inserted his own colorful commentary. This was a crowd-pleasing concert that catered to both the families and hipsters in attendance.
The wardrobe changes alone made the whole thing worthwhile.

For “Party in the CIA,” Al arrived in a black suit and dark sunglasses as he sang in a rather high-pitched and nasally voice about “tappin’ the phones” and “shreddin’ the files.” For “Wanna B Ur Lovr,” he switched into black and red striped jacket and then writhed on the stage as his backing band laid down a funky R&B riff. His crooning was off-key, but that didn’t matter as he sauntered into the crowd to serenade a few patrons in a rather exaggerated and outlandish manner. He put on a giant fuzzy blue outfit that made him look more like the Cookie Monster than a peacock (the intended look) for “Perform This Way,” his send-up of Lady Gaga’s “Born This Way.” And that’s not even mentioning the fat suit (complete with man boobs) that he donned for “Fat,” his take on Michael Jackson’s “Bad,” and the red doo-wag and baggy sweatpants he wore for the hip-hop number “White and Nerdy,” which he performed while spinning around the stage on a Segway. He donned a fake black beard and capably rapped his way through “Amish Paradise,” his parody of Coolio’s hip-hop anthem “Gangsta’s Paradise.” The song came complete with a video-taped backing choir that sang the vocal harmonies. And for the encore, he and his band mates slipped into Jedi outfits to deliver “Yoda,” a parody of the Kinks’ tune “Lola.” He had audience members singing the “Y-O-D-A” refrain in unison.

The mid-set medley of songs such as “I Want New Duck,” “Spam” and “My Bologna” came off poorly as Al rushed through the numbers without providing any real production value. But that was the only miscue in an otherwise highly entertaining set that received a well-deserved standing ovation from the audience.