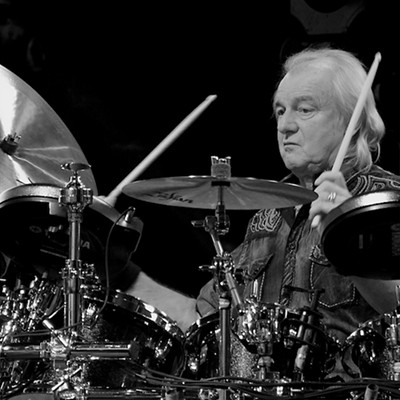 Critics tend to dismiss prog rock acts like Yes because of the lack of passion and rock ’n’ roll gusto. And the fact that the groups indulge in long, conceptual pieces that have classical or even operatic aspirations doesn’t help matters either. Last night before a sold out crowd at Cain Park, Yes certainly didn’t deviate from prog rock standards.

Fronted by Jon Davidson, a replacement for original singer Jon Anderson, the group certainly sounded sharp as it delivered the songs from 1972’s Close to the Edge, which made up the first third of the concert, with precision. While drummer Alan White didn’t play as aggressively enough, bassist Chris Squire and guitarist Steve Howe certainly did. Howe effortlessly switched between guitars in the middle of songs like “And You and I” and sounded sharp on the acoustic intro to “Turn of the Century.” Squire was solid throughout the 150-minute show as well, and he expertly handled a triple-neck guitar for “Awaken,” a tune that started slow but finished strong. But Davidson’s mannerism — hands stretched up to the sky as if he were some kind of Christ figure — had a real air of pretentiousness to them, even if they were consistent with the kind of moves that Anderson used to make.

And while the musicianship was certainly solid, almost to a fault, the material really wasn’t. Playing Close to the Edge and 1977’s Going for the One in their entirety simply wasn’t a wise choice. The material on the albums just doesn’t hold up over time. The same couldn’t be said for The Yes Album, which made up the last third of the concert. Right from the opening notes of “Yours is No Disgrace,” the album’s opening track, it was apparent this material has held up better. The band loosened up to deliver songs such as “I’ve Seen All Good People” and “Perpetual Change.” Even the atmospheric “Starship Trooper” had some swagger to it. And the band, which sprayed the audience with confetti during the finale, seemed to be having more fun. That energy carried over into the encore as the band played “Roundabout,” another tune that showed off Squire’s ability to lay down a groove. On a campaign to get inducted into the Rock and Roll Hall of Fame and Museum, Yes certainly made its case even if it probably wasn't enough to win over the critics.