Backstreet's 'Back' — group plays to capacity crowd at Jacobs Pavilion 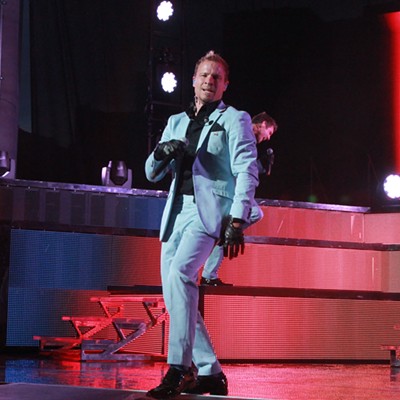 In the world of rock ’n’ roll, it’s tough for teen stars to transition into adulthood. The Jonas Brothers have certainly struggled (and they played to a half-full Blossom earlier this summer). At least the Backstreet Boys, the best-selling boy band of all time, aren’t trying to fill outdoor amphitheaters or big arenas on their current tour. They’ve scaled things down (though their live show is still a fairly big production with wardrobe changes and video projections) and that approach has certainly worked to their benefit — last night’s show at Jacobs Pavilion at Nautica was a virtual sellout. While they could have benefited from the backing of a live band and their choreographed dance moves are still super-cheesy, the guys put on an entertaining show that had the capacity crowd on its feet for the show’s duration.

Decked out in matching suits, group members strutted onto the two-tiered stage and broke into rather robotic dance moves for the hip-hop-inflected “The Call.” Eventually, however, they would loosen up. Six songs in, they would take a two-minute break to change into T-shirts and jeans. In his introduction to “Show Em What You’re Made Of,” a track from their new album, In a World Like This. A.J. McLean said the song was about trying to raise his child to be “fearless.” While his intentions might have been good, the lyrics were clichéd and overwrought. The band fared better on the pretty ballad “Breathe,” which they dedicated to local videographer Don Tyler, who directed the song's music video and was at the show. An acoustic segment went over well, thanks in part to fact that the guys joked around and catered to the audience, adding the line “I want it Cleveland’s way” to their stripped down performance of the R&B ballad “I Want it That Way.” Predictably, the encore included dance hits “Everybody (Backstreet's Back)” and “Larger Than Life” and while the songs so closely resembled their studio versions, we suspect they benefited from some pre-recorded magic, they proved to be fan favorites.