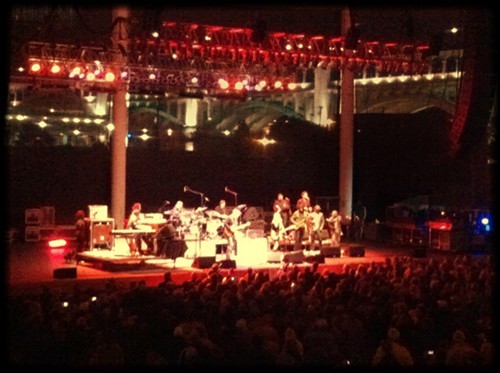 It was a blustery night along the Cuyahoga River last Friday, but the music coming off the stage surely kept everyone warm. It was impossible not to dance.

With songs like "Misunderstood" and "Bound for Glory" rounding out the set, it was clear that what brought everyone together for the show was a love of good music and a total lack of airs. The Tedeschi Trucks Band is a humble nod to the musical traditions that came before them. And in a more immediate sense, they're just top-notch musicians.

Each song offered up indescribable ecstasy. Between the uptempo rockers and the more laid-back Delta ballads, Susan Tedeschi and Derek Trucks were on point throughout the show. The band never once let up.

A gentleman off to my left shook his head in wonder as one song concluded. "Unfuckingbelievable," he said, looking over at me and forming a wide smile. "My God." That kind of emotion rippled through the crowd all night.

Trucks played like the legend he is, spinning slide solos into songs with deft ability and soul. At various points, his lead work was simply gliding over the beautiful tumult of the other musicians. (The quality isn't great, but dig a video from the show below. See photos here.)

Probably the unspoken heroes of the night were drummers Tyler Greenwell and J.J. Johnson, who held down every song with unparalleled syncopation and precision. At times, they took the lead reins themselves and worked in flourishes of creativity in the midst of one of Trucks' solos.

The band encored with "The Storm," an all-hands-on-deck surge of rock. This song in particular is a great example of pairing Greenwell and Johnson against Trucks' work.

All in all, the show was dynamite from the first note to the last. This is a must-see band in the truest sense of the phrase.