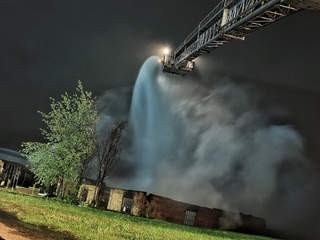 After a chemical leak at a closed factory in Canton Monday, residents have been evacuated from a section in the northeast corner of town spanning about 20 blocks. Today, five schools in the area and multiple local businesses were closed as well.

Via the Akron Beacon Journal, the fire department was called to the former Convoy Containers — which closed down in May, 2011 — at 1811 20th St. NE at 2:03 p.m. Monday. The fire chief said the sulfur dioxide in the air posed a concern for local residents, and that the white smoke at the scene was indicative of a chemical leak.

Residents were offered shelter at a Red Cross station at the local civic center. Though most evacuated families sought out their relatives, more than 100 people trickled in for shelter. It remains unclear how long the evacuation will last, but the fire chief has said they won't be able to get the air quality back to normal without a "neutralizer."