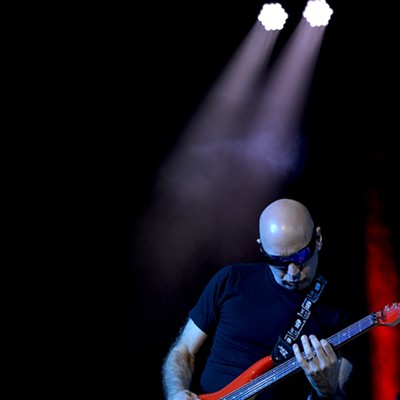 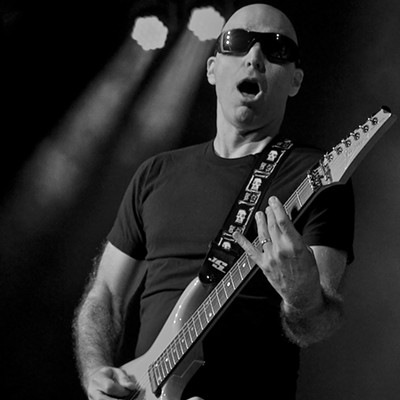 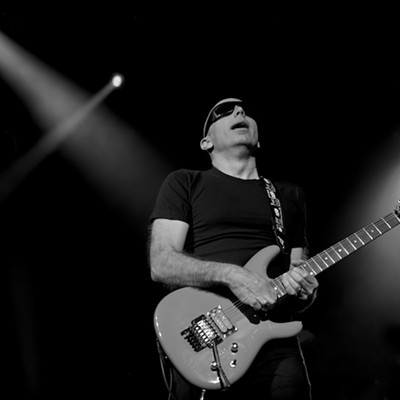 It’s not just the title of his latest instrumental opus — Unstoppable Momentum — also works well when describing the set that Joe Satriani laid down on Thursday night at the Lakewood Civic Auditorium. Over the course of nearly two hours and 19 songs, Satriani and his predictably high-caliber band would visit a lot of different areas in his vast catalog which now pulls from more than three decades of work. The musical makeup of the set was heavily slanted in favor of the latest album, with eight of the 11 tracks making an appearance, but there would also be surprises for longtime fans.

The album, which is one of Satriani’s heavier releases in a while, has some interesting left turns like “Three Sheets to the Wind,” which features an Elfman-esque intro, and some plinky barroom piano from longtime Satch associate Mike Keneally in the mid-section. Keneally, also well-known for his work with Steve Vai and Frank Zappa, handled keyboards and second guitar duties on the night and proved that he's no slouch on the fretboard. In fact, there were a number of riff-driven battle to the death type moments between Keneally and Satriani, most notably during the classic Surfing With The Alien-era track “Ice 9,” which found the pair working hard to ensure that the shred quota would be fulfilled for the evening — and that was only six songs deep into the night.

The interplay between the two revealed something important, that Satriani isn’t afraid to share the spotlight with his band members, whether it means collaboratively working it together or stepping aside to let them have their moment. Although nobody looks cooler wielding an axe than Satriani, whose onstage demeanor is equal parts guitar face mixed with the feeling of a mad scientist in the midst of a haunted laboratory, there is also a real sense of modesty that comes through when watching how he interacts with his bandmates.

Satriani’s set benefited from the warhorse rhythm section anchored by bassist Bryan Beller and drummer Marco Minnemann. Minnemann in particular had the daunting task of interpreting the work of the many drummers who have come before him, starting with Vinnie Colaiuta (Sting), who handled drumming duties on Unstoppable Momentum. Satriani’s rich history of past skinsmen also includes Gregg Bissonette (David Lee Roth, Ringo Starr) Manu Katche (Peter Gabriel) and his familiar associates Jonathan Mover and Jeff Campitelli. That’s a lot of different eras of drumming to get right and Minnemann made it look easy.

Most of the expected favorites got their place in the set, with “Satch Boogie,” “Always With Me, Always With You” and “Summer Song” all making an appearance. But it was the lesser heard tracks, such as “The Crush of Love” and especially, the title track to Satriani’s 1993 rarities collection Time Machine that added additional spark to the evening. Throughout the night of instrumentally-focused numbers, the words themselves from Satriani were enthusiastic (along with the requisite guy in the audience to yell “you rock!”) but the talking was kept to a minimum and that was appropriate, because the important communications ultimately came across through the music that was played.

Deep Purple guitarist Steve Morse opened with a tight 45-minute set with his band. The opportunity to see Morse on the solo tip is a rarity and Cleveland appearances by Morse (and Deep Purple) have been rarer still in recent years. It certainly made for a nice double bill of guitar rock with Morse and Satriani sharing the bill and with both sets ending with standing ovations, it indicates that a repeat performance would be welcomed.