A preview of the Rock Hall’s new exhibit

A wealthy businessman, the late Julio Mario Santo Domingo, Jr. amassed an incredible collection of rock ‘n’ roll memorabilia during his lifetime. After his death, the items were loaned to the Rock and Roll Hall of Fame and Museum. Next week, the Rock Hall opens Collecting the Counterculture, a sampling of his collection.

This morning, curator Meredith Rutledge-Borger walked us through the exhibit as the paint on the walls was literally still drying. “The stuff that wasn’t rock n’ roll stuff went to Harvard,” explains Rutledge-Borger. “We had a lot of stuff to go through and we chose things that related to the Rolling Stones exhibit and other items that were too good to keep under wraps.” Stones-related items include old posters and photos and a 3-D poster of Mick Jagger.

Some of the significant items: a bicycle owned by Pink Floyd’s Syd Barrett; a Lead Belly essay written by Woody Guthrie; a Japanese cabinet that belonged to John Lennon, who kept a stash of weed in the bottom drawers; and a Who drummer Keith Moon’s diary (where you can see he penciled in a lunch date with actress and singer Ann Margret). The soundtrack that plays in the exhibit area includes some of Domingo's favorite songs. 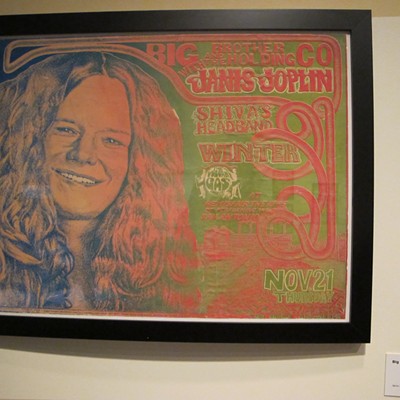