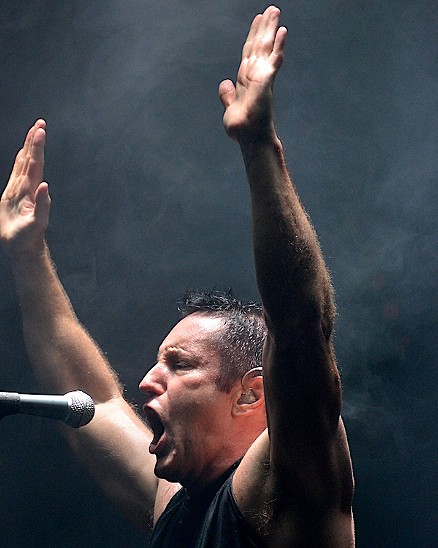 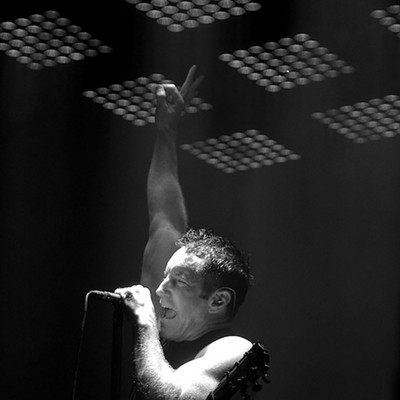 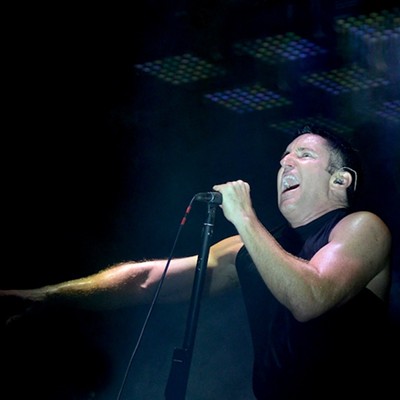 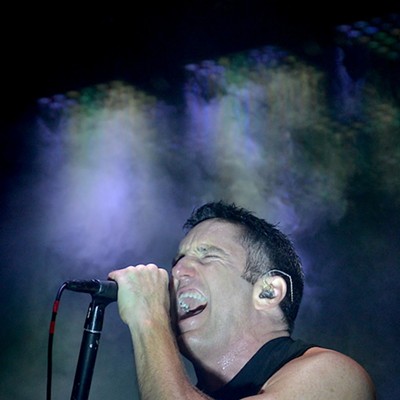 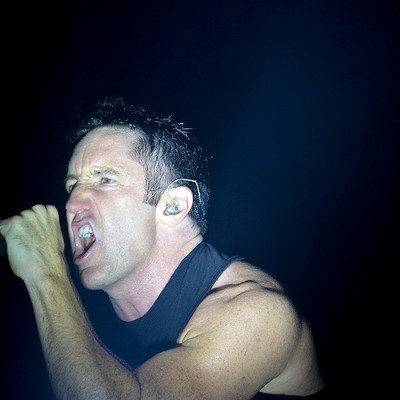 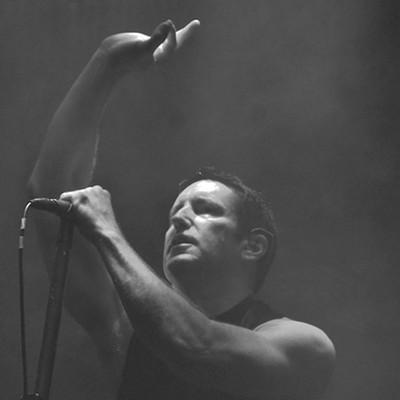 Putting Nine Inch Nails on ice for a few years was the best thing Trent Reznor could have done for the band. Last night at the Wolstein Center, the act’s first Cleveland appearance since reactivation was a vital, powerful display of music and stage design.

As par for the NIN course, the show touched on the band’s entire sonic continuum: searing electro-metal aggression (“Somewhat Damaged,” “1,000,000”), twitchy disco (“The Hand That Feeds,” “Survivalism”), smoldering rock (“In This Twilight”) and ’70s Bowie-funk (the standout “Into The Void”). Older songs such as “Terrible Lie” and “Piggy” sounded more alive than they had on NIN’s recent tours; the latter’s murky menace especially felt unsettled. The addition of several choice album tracks — in particular The Downward Spiral’s “A Warm Place,” which was an enveloping swell of funeral keyboards emanating from a stage obscured by bright white light and smoke—also contributed spice.

But this Nine Inch Nails touring lineup also deserves major credit for the night’s execution. Drummer Ilan Rubin is a forceful player (both “Wish” and “March of the Pigs” assaulted like razor burn), but he’s versatile enough to handle the more funk-based style of new bassist Pino Palladino. The willowy player—who’s played with the Who, John Mayer and Joe Walsh, as well as on Gary Numan’s I, Assassin record—added the needed grooves to several songs from NIN’s new album, Hesitation Marks, especially the slinky “All Time Low” and the chugging-train electro-diffraction of “Running.”

How well Hesitation Marks’ sprawling, army-of-synth songs came across live was the night’s most exciting surprise. “Disappointed” and “Copy Of A” — the former an approximation of Factory Floor - like techno, the latter a strobe-driven bundle of anxious perforation and keyboard static — were also highlights. Credit for this success should also go to the presence of two additional vocalists, Sharlotte Gibson and long-time Rolling Stones backing singer Lisa Fischer. The pair popped on and off stage throughout the night and added a soulful dimension to both old and new NIN songs. Often, their vocals functioned as atmosphere (precise hiccups on “Came Back Haunted,” wordless trilling on “Even Deeper”); on other songs — notably on the chorus of “Into The Void” — they took a more central role in transforming the music.

As always, NIN’s elaborate stage show also had a transformative effect. Modular, blocky lights were a common theme—for example, the band members stood under beam-me-up showers of light during opener “Copy Of A”—as was the use of silhouettes and smoke machines. Throughout the night, a sheer screen also occasionally obscured the band; projected onto this screen were a variety of patterns (flame-like singed-corners; oozing purple muck; arcade-like vector graphics). The result felt like a high-tech Instagram filter.
Reznor didn’t address the crowd much, although during the encore, he casually acknowledged his Cleveland roots, and said that as they were driving into the city, a few people asked him what it was like to live here. He drew big cheers by noting he wrote much of Pretty Hate Machine here (and drew more muted applause by noting his youthful desire to get out of the city), but ended the reminiscing by sincerely noting how the city had really shaped him, and said it was “good to be back.” Reznor meant Cleveland — but it’s safe to say everyone in attendance last night felt the same way about Nine Inch Nails.