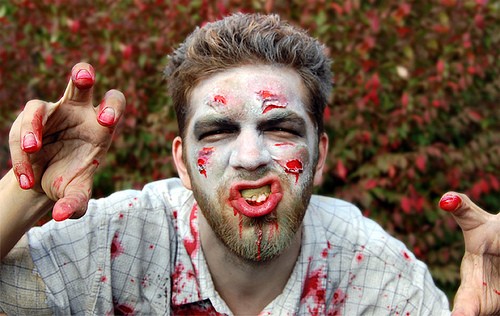 When Lakewood police received a call on Saturday afternoon regarding a large street fight, they might have thought they'd be dealing with some good ol' suburban riffraff.

What they found when they approached a bus stop on Clifton Avenue, however, was far from the classic brawler- in fact, it was other worldly.

A large group of re-enactors dressed as zombies had taken to the streets and were avidly engaging in some sort of staged combat sequence.

The Plain Dealer reports it's unclear exactly what the group was re-enacting, but noted that the event did occur just before the Season 4 premiere of The Walking Dead, which aired last night on AMC.

Details aside, we're pretty pumped there's a large group of locals who will spend their Saturdays in zombie getups throwin' air punches.

Now see: Video: This Footage of Geauga Lake Amusement Park Looks Like Something Straight Out of the Walking Dead>>