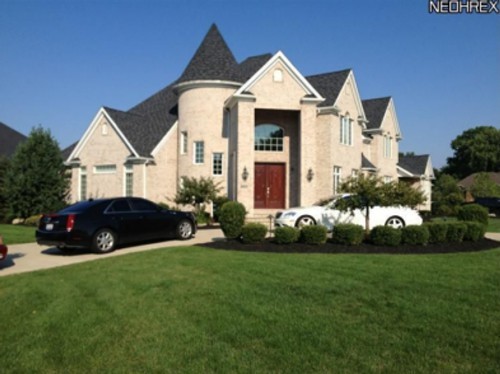 I still want (and intend) to write a loving tribute to Daniel Gibson and his statistical/emotional contributions to the Cavaliers over the past seven seasons. But for now, know that his home in Westlake has appeared on Zillow.com. Listed at $999,900, the 8,800 square-foot mansion includes 5 bedrooms, 6 bathrooms, a workout room, a home theater, and "celebrity caliber upgrades" throughout.

Zillow does note that the "recording studio" is not included in the asking price. (Nor, presumably, is the University of Texas billiards table).

Gibson remains one of several veterans yet to land on an NBA roster. Rumors briefly circulated that the Denver Nuggets were interested in enlisting his three-point shooting, but salary cap limitations make a signing unlikely.

One thing is certain, though: there won't be a home for him in Cleveland (on the Cavs or in Westlake). GM Chris Grant has made it clear that the organization was ready to "move in a different direction," and a sharp-shooting shooting guard in a point guard's frame wasn't what the team needed. Gibson, to his credit, has remained effusive about the city and the team.

There's still a chance for Boobie. Any number of injuries or failed rookie projects could result in a roster invitation somewhere. But for now, Gibson seems much more entangled in the domestic sphere: He's been partying in L.A. with his wife, R&B singer Keyshia Cole (w/o wedding rings on!!!, via gossip sites) and deflecting rumors about marital infidelity.

He's now reportedly on a 10-day vacation in the Bahamas with Cole.

Just for kicks, here's a picture of Boobie at a weekend party for Cole's birthday at a Hollywood club. This is one of the more preposterous jackets I've ever seen worn by a man.