John Whitacre was a 56-year-old marketing executive for Suarez Corporation Industries 14 months ago when he parked his Lexus in the garage of his Canton home and shot himself in the head. It was "the night before he was to testify to a secret grand jury investigating his longtime friend and boss, Benjamin Suarez," Akron Beacon Journal reporter Phil Trexler reported yesterday.

Benjamin Suarez, the 72-year old founder of the company, and CFO Michael Giorgio were indicted by a federal grand jury last month for conspiring to funnel illegal campaign money to republicans Jim Renacci ($100,000) and Josh Mandel ($105,000) leading up to last November's election for spots in U.S. House of Representatives and Senate, respectively. Renacci, of Wadsworth, beat Betty Sutton to stay in the House representing a new gerrymandered district and Mandel, Ohio's treasurer, lost to incumbent Sherrod Brown for a seat in the senate.

Suarez and Giorgio funneled money through their employees, and spouses of their employees, to the campaigns of the two candidates, totaling $205,000 by the time the Toledo Blade made those donations public in August 2011 (read "Canton firm's workers making unusual donation"). Then the FBI started investigating: "The donations were a red flag—it is illegal for employers to urge employees to give to certain candidates in exchange for later reimbursement, as a way around the $2,500 per-donor ($5,000 for the primary and general election combined) on campaign contributions" (the two candidates ended up giving the money back, but earlier this month the Dayton Daily News reported that Mandel was advocating for Saurez's business interests in California at the same time the company was raising money for him).

John Whitacre, 56, had worked alongside Suarez for 34 years as the company's marketing operations director when he put a bullet in his head the night before he was supposed to testify against his boss: "Whitacre was loyal to the millionaire businessman right up to the end," the Beacon Journal reported yesterday:

A coroner’s investigator spoke to Stephanie Whitacre and took notes of the executive’s mounting torment. Whitacre, 56, had apparently been drinking heavily in the days leading up to his suicide.

“She said he had spoken of ending his life, stating ‘I should just end it,’ ” chief investigator Harry Campbell wrote in his report. “He was also scheduled to appear before a federal grand jury tomorrow.”
...
Suarez, 72, denies the accusations.

Whitacre and his wife were among the contributors, records show. Those familiar with the case said Whitacre wanted no part of the grand jury investigation. Meanwhile, his wife of 23 years, Stephanie, was urging him to cooperate, they said.

Suarez this week acknowledged his executive’s emotional disconnect. He said Whitacre had suffered from severe back pain for a long time and had issues with alcohol. But it was the prospect of testifying that pushed Whitacre, Suarez said this week.

Whitacre, he said, would have testified in favor of Suarez’s defense: that the workers gave willingly and were not reimbursed.

“He didn’t want to testify and that seemed to be the tipping point for him,” Suarez said. “It wasn’t anything he’d said. He couldn’t take the pressure of testifying before a grand jury … It was horrible. We were traumatized.”

Suarez was indicted 13 months after Whitacre's suicide. Here is the indictment filed in Cleveland's federal court on September 24:

This chart from the Blade's 2011 story shows the Suarez employees, including Whitacre and his wife, who donated to the campaigns (with the understanding they'd be reimbursed by Suarez): 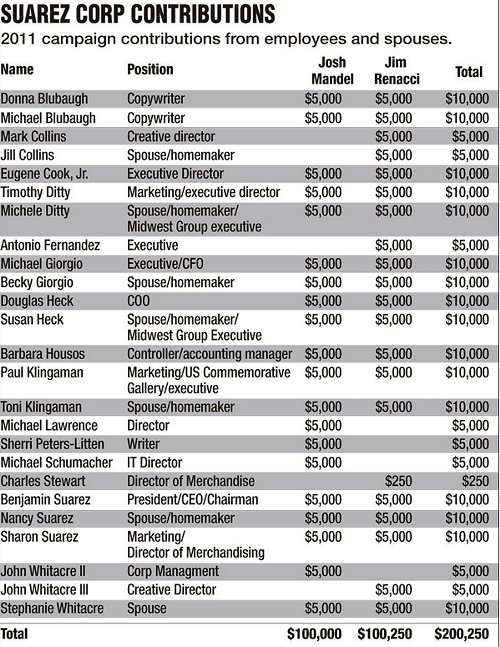