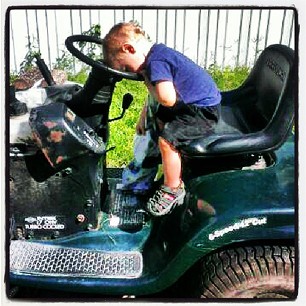 You know when you're really hungry and kinda tipsy so you think it's a good idea to walk through the drive-through? No? Well this guy from Canton gets it.

While he wasn't intoxicated, a man tried to pass through an OVI checkpoint Friday, September 27 on a riding lawnmower. He was on his way to pick up some pizza, and apparently wanted it badly enough to use any mode of transportation available.

Riding lawnmowers count as "motor vehicles" if used on public roadways, which require a license to operate. The Stark County Police officers at the checkpoint on Rt. 172 between Canton and East Canton took the man into custody because he didn't have a valid driver's license and also had warrants out for his arrest. The mower was towed.


Next time he may want to consider getting his pizza delivered.