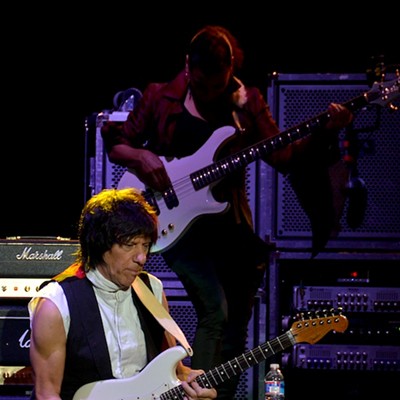 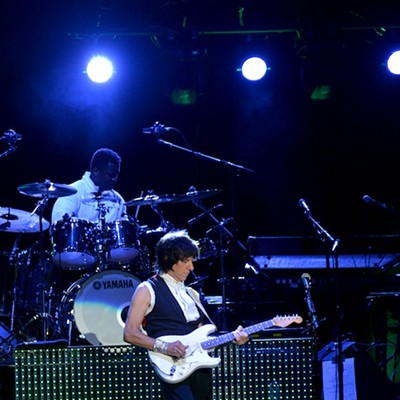 The pairing of guitar hero Jeff Beck and pop composer Brian Wilson, whose co-headlining tour stopped at E.J. Thomas Hall in Akron last night, doesn’t immediately make sense. While both have been inducted into the Rock and Roll Hall of Fame and Museum, the connection between them ends there. Despite their vast differences, the show played well to the mostly middle-aged audience that filled the auditorium and the two acts meshed better than expected (but then this show does come near the end of a month-long tour).

Wilson started the show off with a 70-minute set. He gingerly walked to the piano and thanked the audience for attending the concert before commencing to join his 11-piece band in an a cappella rendition of “Their Hearts Were Full of Spring.” While his signing and piano playing seemed tentative at best, Wilson didn’t need to do too much heavy lifting. His terrific band that featured former Beach Boys Al Jardine and David Marks did the work for him. He did become more animated as the set went on, taking lead vocals on the Beach Boys’ tune “Marcella” and singing most of the lead vocals on “God Only Knows.” The end of the set was peppered with hits such as “I Get Around” and “Good Vibrations” but middle-of-the-set gems such as “Darlin’” and “Heroes and Villian,” which feature a mid-song barbershop segment, really stood out.

After a short 15-minute break, Beck played a 60-minute set that featured his guitar theatrics. With his sleeveless shirt and cropped haircut, the guy just looks like a guitar superstar, and he didn’t disappoint. His version of “Little Wing” was poignant and he adopted a Middle Eastern sound for “Yemin.” Wilson and the Beach Boys joined him mid-set for “Our Prayer” and then returned again for an encore that featured “Barbara Ann” and “Surfin’ USA.” While those classic Beach Boys tunes don’t necessarily cry out for some technical electric guitar work, Beck kept it in check enough so that he didn’t overwhelm the harmony vocals and intricate instrumentation.