Aqueous Set to Release New Live Album; Catch Them in Cleveland on Friday 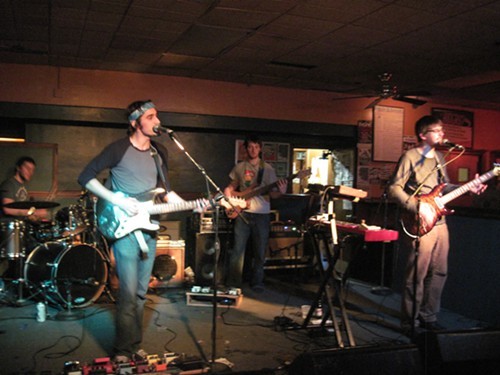 The floor at the Beachland Tavern tends to wobble a bit when the music really get going on the stage. Even when the crowd is small, the aged linoleum acts a barometer for the energy in the room. Aqueous, four guys from down the road in Buffalo, N.Y., have stopped by the room several times this year. The floor never stopped shaking.

This week the band returns to the Ballroom, however, where disco ball refractions mingle with throwback paintings of the venue’s Croatian roots. Like it or love it, that floor’s gonna be quaking, as well. Aqueous - Mike Gantzer (guitar/vocals), Dave Loss (guitar/keys/vocals), Evan McPhaden (bass), Nick Sonricker (drums) - have proven that little truth all year long.

On Dec. 31, the band’s fourth live volume will grace the Internet. It’s the perfect follow-up to previous incarnations of the Live Nugs series. This time around, Aqueous hand-picked five stellar cuts from the fall. Live Nugs V.4, a sprawling 73 minutes of face meltage, shows precisely where Aqueous is at these days.

“When we put a new live album out, we want it to reflect the current state of the band,” Gantzer says. “I like to think that the band is always shifting and moving, but I think that this is a culmination of the past tour.”

Indeed, it was a fiery autumn for the band. Aqueous stopped by some of their favorite haunts in the region and dove deep into New England, where some of the latest Nugs jams were crafted.

As soon as the new album hits the Internet, dial up the 22-minute “All In,” which will highlight everything you need to know about the band.

Throughout the song, the interplay among the musicians is stunning. It’s difficult to really hone in on one particular element or section of the jam; the only way to experience it is in real time. McPhaden’s bass work around the seven-minute mark leads into a melodic explosion between Gantzer and Loss. By 8:30: Holy shit! All the while, and especially as the jam cools down into funk terra, Sonricker builds the spinal cord and pushes the journey onward.

And they’re not even halfway done with the trip at that point.

Thing is, jams like this “All In” straddle so many musical ideas that the listener - at the show or in between a pair of headphones - really has no choice but to perceive them as journeys. Throwing down a fine, danceable groove is one thing (check); opening up whole worlds is quite another. The bands that can pull that off are destined for something else, something that can’t be translated into words.

“All In” builds into a frenzy before landing on the song’s traditional final section, which gets a full six minutes of Gantzer/Loss judo. Supercalifragilistic.

And that’s just. one. jam. For the full Nugs effect, start up the album the way it was constructed, with a fine “Strange Times” kicking things off as the opening track. It’s a bit of a fan favorite, judging at reception at shows over the past year. Gantzer’s foray into slide guitar is on full display here, as the band jukes back and forth between ambient environments and heavier, ass-kickin’ rock ‘n’ roll. “Origami” and “Complex” join “All In” in the heart of the album, showcasing setlist staples and, of course, that towering chorus in “Complex.” (The main jam in “Complex” features clutch keys work from Loss, by the way.)

The collection closes out with “King for a Day,” one of the band’s new songs this year. And with the final chords, one realizes how significantly Aqueous has grown as a band in 2013.

One can point to the evolution of the Live Nugs series as one indicator of the band’s growth. One might also be inclined to point to 2012’s studio outing, Willy is 40, and plans for a follow-up in 2014 as signs of a band hellbent on diligent creation.

“We’re just trying to become the best of our craft as our abilities allow,” Gantzer says. “It’s super fun and rewarding. To work together and see it all change, it’s really cool for us.”

Aqueous have graced Cleveland four times this year, with each show representing either a different trick up their sleeves (like when they formed Brocqueous for one show with the local guys in Broccoli Samurai) or a stylistic evolution (like opening up the Aug. 21 show at Beachland with the slide-heavy “King for a Day”).

On Friday, the band joins Broccoli Samurai and Stoned and Beautiful (the latter will release their own new album during the show) on the bill at Beachland. They’ve garnered a pretty dedicated fanbase already here in Northeast Ohio, and this weekend’s show will certainly shoot much-needed serotonin into the main nerve of Cleveland’s musical drive.

The latest Nugs drops on New Year’s Eve, but Aqueous will cue up the goods live and in-person; you’d do well to check ‘em out.

The band released "Skyway" from the July 13 show in Buffalo as a bonus Live Nugs track. Check it out here and stream their most recent studio album below.