Vermilion Car Salesman Sent to Hospital After Being Bitten by Spider Monkey: UPDATE 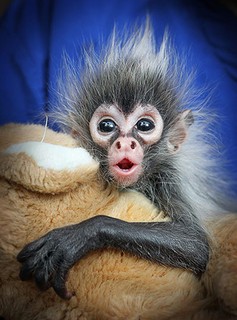 UPDATE 2: According to the Erie County Health Department, Brodi did not have rabies. After the spider monkey was euthanized today, the rabies test came back negative.

Pending approval from the Ohio Department of Agriculture and barring a forthcoming legal challenge, the spider monkey that bit a man in Vermilion may be euthanized today. The concern, according to the Ohio Department of Health, is whether Brodi has rabies. The department explains that euthanization is needed to test the monkey's brain.

Vermilion Police (and Brodi's owner, Jacob Ruehlman) have confirmed with a veterinarian that Brodi has received a rabies vaccination.

Some jobs are naturally deemed high risk, but car salesman isn't at the top of the list— that is, of course, unless you're a salesman who deals with customers and their exotic animals.

According to a police report, an employee from Vermilion's Pat O'Brien Chevrolet was recently taken to an area hospital after being bitten by a customer's pet spider monkey.

Apparently the employee asked the animal's owner if he could pet the monkey (they are cute, aren't they?) and was told he could. But Brodi, the monkey, wasn't too sure and bit the man, drawing blood.

As police investigated the incident, they found the monkey's owner to be in illegal possession of an exotic animal (surprise).

No word on where little Brodi will end up next.

Still up for debate, however, is the pressing question, Who goes car shopping with a pet monkey?