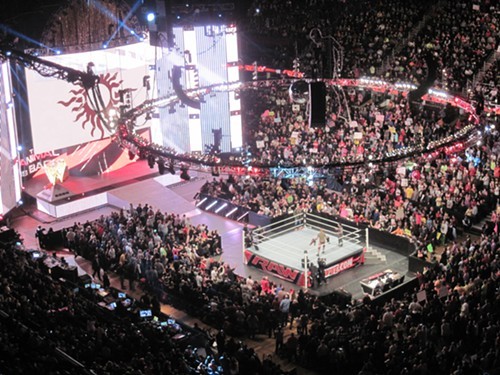 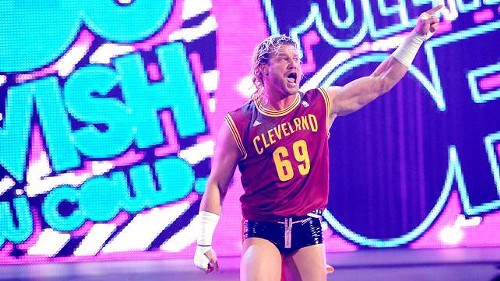 I walked into the restroom to find a large man explaining the finer points of Sunday night's Royal Rumble to a young boy, maybe 5 years old or so.

"Why?" The young boy clearly didn't understand the man's callousness.

Now at this point, I had no idea what they were talking about. They eyed me warily and dried off their hands before leaving to discuss this Batista character further. I was a stranger in a strange land: Monday Night RAW at Quicken Loans Arena. 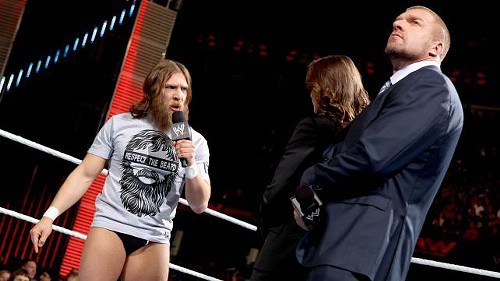 In an instant, I was crushing a Bud Light among the upper-deck denizens of the night. The vibe was pleasant, crossing now and then the threshold of unrepentant joy. Things were about to begin down in the ring below. Explosions - literal crash-bang-boom explosions - had been promised.

An angry man wearing essentially nothing but a t-shirt strode into the ring. WTF! Who the hell...? The crowd was chanting YES! YES! YES!, and arms were flailing throughout the Q. This was a moment that called for unbroken attention, save for the errant gulp of light beer. The show was on.

This was Daniel Bryan, who began the night by telling off the likes of Triple H and Stephanie McMahon for overseeing an unjust Royal Rumble the night before. This was Daniel Bryan, the guy who garnered the loudest eruptions of cheer and praise and sudsy belches throughout RAW's proceedings. The crowd loved this guy. Hell, I loved this guy. He was committed to the role - and committed even more so to wearing a t-shirt with no pants. (I mean, this wasn't a case of shirt cocking or anything, but that takes some level of determination.)

Listen, I had no idea what was taking place. I didn't watch the Royal Rumble the night before, and I had probably only clocked about six minutes of WWE over the past 15 years. I sure as hell didn't know who Daniel Bryan was. But I began to realize that there was a cogent narrative unfolding here.

Everyone had their favorites (read: DANIEL BRYAN; yes, I eventually joined the masses). And no one liked Randy Orton or Dave Batista or anyone who entered the ring wearing a suit (and rightfully so). In fact, the swell of either raucous cheers or damning boos became the common thread of the night.

You were an active participant in the theater, whether you wanted to be or not (you did). Perhaps what was most interesting to me was how dedicated the WWE fanbase still seems these days. I recall fervent fandom in the late 1990s, back in the WWF era. But the show rolls ever onward.

At times, I probably did the exact opposite of what you should be doing in the crowd at a WWE show when I began silently musing on the subculture of niche interests. The dedication of the people at the Q last night reminded me of my time at, say, Phish concerts. The WWE has gone on steadily over the year, flying ever more under the radar.

Fueled by mutual energy and ample re-ups on beer from the Loudville Grille, I fell into the ebb and flow of the crowd. There were lulls now and then - mostly when WWE would broadcast some sort of advertisement for future matches (and while the USA Network would cut to its own commercials) - but the absurd theater couldn't be ignored.