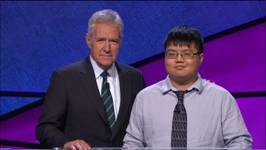 According to Chu's Twitter account, he's garnered both a robust fanbase and at least a handful of detractors during his two-day stint on the show thus far. Reading through some of the retweets he's posted, it really begins to seem like tonight's show will be *can't-miss TV* (the episode will air at 7:30 p.m., by the way).

A quick sampling of Internet opinion:

@arthur_affect So happy to see someone playing game theory correct on Jeopardy. Totally nerded out after you bet to tie. You're awesome!

I hate that damn stupid Arthur Chu bastard on #jeopardy so much, I want to destroy his stupid dumb asshat face