Tim Rutili began the show by describing the memories and sentiments behind "Don't Let Me Die Nervous" - namely, how he really wanted to have sex with his brother's girlfriend years ago. "And there are some things you want to touch but you can't touch..." He riffed on that line for a while before starting up a super-experimental take on the song.

The rest of the show flowed tightly from that point, criss-crossing Califone's latest album, Stitches (stream below), for the most part, and dipping now and then into the recesses of the band's catalog.

Often, Califone gets billed as an "experimental blues-rock outfit," which is probably a good way of at least broaching conversations about them. For comparison's sake, I kept going back to Jim O'Rourke's stuff in my mind as the band played. A similar sense of dissonance and tension-and-release is always lurking around Rutili's rickety melodies. But, really, there's something unique about Califone. Picture this: You've got slight Rutili working either a ragged acoustic or electric guitar and then alternately banging away on a keyboard, all of which are wired through a dynamic effects board. Then you've got Wil Hendricks accenting everything with a) keys b) more guitar or c) effects-drenched bass. In the back, a duo of drummers pound out full-bodied beats, alternating between bass-focused mallets and tiny splash cymbals or brushes along the snare.

One certain highlight came during "Stitches," which took on an even more emotional life than its studio counterpart. Hendricks' atmospheric keys work balanced out Rutili's ever-moody singing. Songs like that made the show quite transformative, removing the audience and the bar as a whole completely from the barren Cleveland winter raging outside. 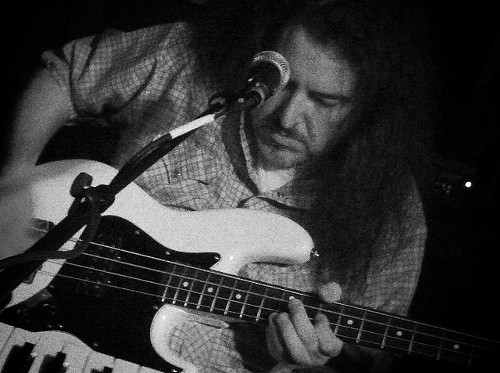 It should probably be pointed out also that a handful of Lotus fans were turned away when that Ballroom show sold out. Rutili asked if anyone in the crowd had come from the Lotus show, and a handful of people raised their hands. Unsurprisingly, they seemed to really dig Califone, whether they knew who the hell this band was or not. (Note, for whatever it's worth, I had vacillated between these two shows in the run-up to Thursday night. I'm really pleased with the choice I made. This was a terrific show.)

The evening opened with Nashville guitarist William Tyler layering the Tavern with a foundation of loops and effects. His songs called to mind the endless open road. As an instrumental warm-up to Califone, Tyler's music was really entrancing. And the crowd was incredibly receptive, standing silently in awe and tossing around some nice light-hearted banter with Tyler in between tunes. (Helpful fact: Tyler is not a Steelers fan, either, Cleveland, though he enjoyed opening up for Yo La Tengo [duh] in Pittsburgh the night before their team played in the Super Bowl.)