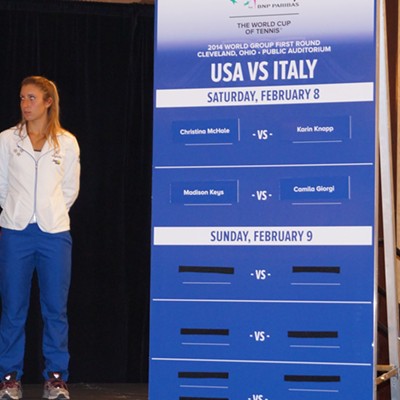 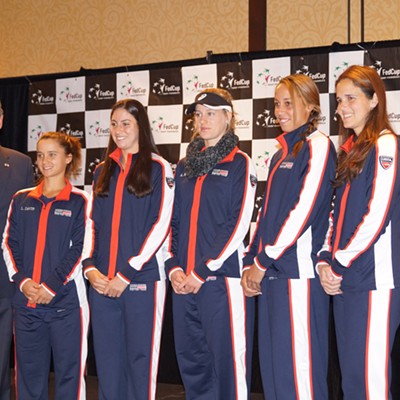 Pics from the FedCup Draw Ceremony
Click to View 9 slides

Madison Keys and Christina McHale will represent the U.S. FedCup team in the singles matches this weekend. They'll square off against Italy's Karin Knapp and Camila Giorgi. Alison Riske and the Gates Mills native Lauren Davis will play doubles on Sunday afternoon against Natassja Burnett and Alice Matteucci.

In a draw ceremony at the Marriott Hotel's Key Center Ballroom, Christina McHale's name was selected from a glass bowl in which all the players' names were affixed to tennis balls, a cute gag. McHale, the only returning FedCup member on the U.S. team, will play first against Knapp on Saturday at 1 p.m.. Keys, the U.S. team's top-ranked player, will follow against Giorgi.

Sunday, Keys and Knapp (the respective No. 1s) will kick things off, followed by McHale v. Giorgi. The doubles match will proceed after a thirty-minute break.

McHale is the lowest-ranked player on the American side, but team captain Mary Joe Fernandez said McHale's experience was one of the deciding factors when she selected the singles representatives.

"As [Christina has] mentioned, she's actually led the team the first day the first match," Fernandez said in a press conference after the draw. "Christina has been here before. She knows what's coming her way."

McHale has in fact played both Knapp and Giorgi and won both times. Her success against the Italians may have influenced Fernandez' decision. Alison Riske, ranked slightly higher and coming off a successful performance at the Australian Open, has lost in both of her previous match-ups against Knapp and Giorgi.

McHale anticipates a tough match against the 26-year-old Knapp, but says she's ready to "just get out there."

"It was like I won a raffle when they pulled my name out," she said.

When asked whether or not she had read the Hunger Games, and whether the anticipation during the tennis ball bowl thing was at all reminiscent of the terror and anxiety young children felt before the fateful drawing in their various districts, McHale responded that she had indeed read the series — "I love the books" — but that this particular experience wasn't anything like the Hunger Games at all.