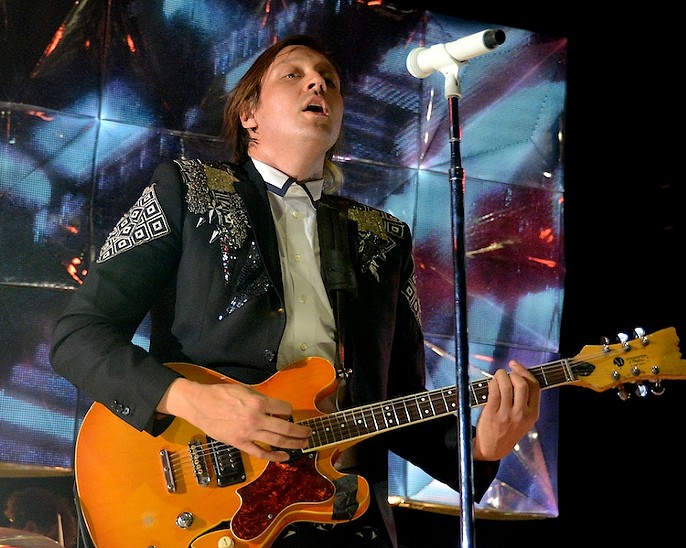 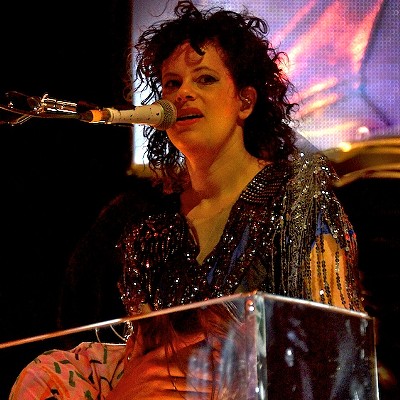 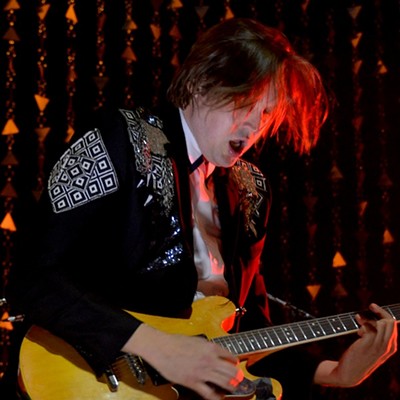 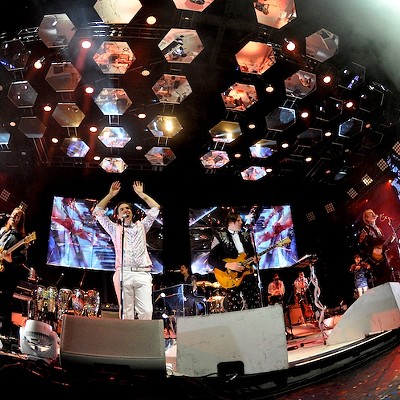 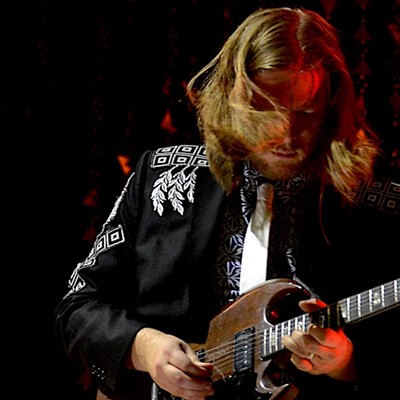 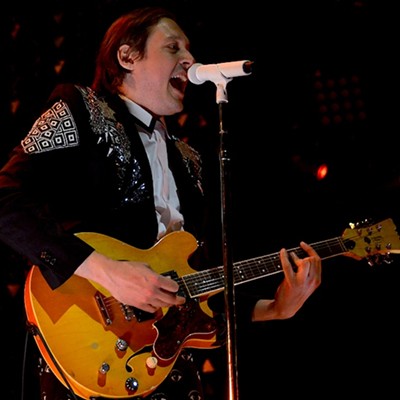 Ten years after Arcade Fire put out their first album, Funeral, the Montreal-based band is touring arenas, shooting millions of pieces of confetti into crowds of riotous fans and commanding the stage like the biggest rock stars of our generation. Bruno Mars may be performing in the Super Bowl halftime show, and Beyonce may command the charts, but Arcade Fire may be the one true group of musicians writing powerful, throttling songs drenched in emotion. Songs that mean something more. Songs that make you want to throw your body into a giant pit of sweaty people to move, dance and thrash until time escapes you.

The dozen-member band took the stage to a song from Funeral, but abruptly stopped before launching into the jagged “Normal Person,” setting the tone for a show full of songs from last year’s Reflektor. “Flashbulb Eyes,” up next, was dark and sinister, establishing the vibe of the show.

Frontman Win Butler flirted with the crowd, walking onto a platform in the middle of the floor, filled with fans reaching up to him. His charisma was incredible, a force that can’t be described. His passion was evident, but it’s also notable that his voice was even more beautiful in person than on recordings.

Before launching into “The Suburbs,” he sarcastically remarked to the crowd that “this is a song about growing up a little far from the cool part of town.” But his sense of humor quickly dissolved when the song began, and each note hit deeper than the last. By the end of the song, a hush came over the band. Butler crooned quietly, playing the piano, and taking our breath away.

Through songs old and new, the pulse of energy the band emitted never waned for a second. Vocalist Regine Chassagne flitted across the stage flawlessly, switching from accordion to keyboard and even fitting in a ribbon dancing solo. Her facial expressions varied from haunting to ecstatic, and when she appeared on the video screens on each side of the stage, she seemed to immediately set a mood.

But even more impressive was what happened during “Sprawl II (Mountains Beyond Mountains).” Someone in the audience collapsed about 30 seconds into the song, and as soon as the band members noticed, they immediately stopped playing. Clearly concerned, they waited for medical crews to carry the person to safety. After asking the crowd if everyone was OK, they re-started the song from the beginning.

The band didn’t need to rely on stunts to keep the audience’s attention, but it did throw in a few surprises. A human disco ball (a person covered in tiny mirrors) slowly turned around and around on the second stage (where both opening acts performed) during “Afterlife,” a physical representation of the new album.

Right after that, Chassagne appeared on that second stage for “It’s Never Over (Hey Orpheus),” singing Butler’s echo across the venue from him, literally reflecting the song from one end of the arena to the other. It’s a truly original set up, and it made for a fascinating visual for a song that’s full of beautiful, haunting echoes.

The encore began with a second stage performance of the Rolling Stones’ “(I Can’t Get No) Satisfaction” by the “fake” Arcade Fire, a band of people wearing masks that look like oversized versions of the band members’ heads. The “real” Arcade Fire then took over on the main stage, playing the glorious seven-minute-long “Reflektor,” followed by a cover of Devo’s “Uncontrollable Urge.” Streamers and confetti littered the Q during “Here Comes the Night Time,” a beautiful sight no matter where you were sitting or standing.

Arcade Fire closed the encore with “Wake Up,” a song so rapturous, so full of energy that it’s hard to imagine that it came out of their first body of work a decade ago. Incredibly, as far as this band has come in that time, one of their first songs is a pure, exhilarating five minutes of rock mastery. So how did they go up from there? It’s a mystery I can’t solve, and one I don’t think I’ll ever understand. But with music, it’s not about understanding. It’s about feeling. And in this case, a little bit of dancing, too.

Dancing was a huge part of the opening acts sets too. Arcade Fire chose two DJs as openers: Kid Koala and Dan Deacon. Kid Koala got things warmed up, but when Dan Deacon arrived, the dance party really started. He had everyone on the floor make a huge dance circle, and designated two costumed concertgoers as the first to get funky to his music while the entire arena watched. His antics continued with a never-ending human bridge, a waterfall of high fives and two dance lines that followed group leaders. It set the mood for audience participation early.