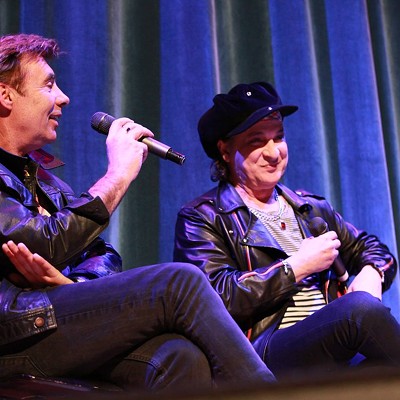 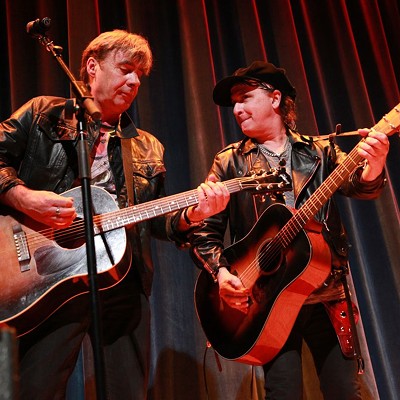 Last night as he introduced the New York Dolls’ Sylvain Sylvain and the Sex Pistols’ Glen Matlock, who were both in town for a special performance/interview session, Rock and Roll Hall of Fame and Museum president and chief executive officer Greg Harris admitted their appearance in the Rock Hall’s fourth floor theater had come about in a rather unusual manner. “The museum usually sees someone out on tour and contacts them — these guys were on tour and they contacted us,” he said, adding that he was “personally thrilled” to introduce the duo for a sold out interview session and performance. “To have that kind of call come through was great. We didn’t think that long about it. We said, ‘We’ll do it.’ They’ve made some incredible music through the years and so much of what has come out in the ’70s and ’80s and ’90s was impacted by them. It’s incredible, vital music.”

Curatorial director Howard Kramer then took over the interview portion and began by asking Sylvain about his first trip to London.

“Me and [New York Dolls guitarist] Johnny [Thunders] used to go to London to buy platform shoes,” he said. “I was there in 69. Every summer, we would work and then spend it all on boots.”

For his part, Sylvain recalled what it was like trying to play in New York prior to the punk rock explosion. “CBGB opened their doors in 1975,” he said. “That’s when we broke up. We had to find places to play and our first big paying gig was a men’s bathhouse in Brooklyn.”

And Matlock talked extensively about working at Malcolm McLaren’s West London clothing store Let It Rock, relating a story about how he had first heard about the Dolls while working at the store and then caught them play live when they opened for the Faces. “It was a watershed moment,” he said.

The two also spoke fondly of Iggy Pop and the Stooges and both mentioned how upset they were by the recent death of Stooges' drummer Scott Asheton, who recently passed away at age 64.

Each artist then performed an acoustic set and played a few songs together. While neither Matlock nor Sylvain can sing particularly well, they made up for it with their incredible enthusiasm. Sylvain regularly asked the audience to join him as he sang New York Dolls songs such as “Trash” and “Pills,” a Bo Diddley tune the Dolls famously covered. (And he shared a funny story about getting kicked out of a Bo Diddley concert). He concluded the set by walking through the audience with his guitar slung low on his hip and encouraging fans to sing along with him as he sang the ballad “Leaving New York,” a song from his forthcoming solo album. Constantly smiling, he even kissed a woman on the cheek as he walked up and down the theatre aisles.

Matlock yelled more than he sang but he held his own on acoustic versions of Sex Pistols tunes such as “God Save the Queen” and “Pretty Vacant,” encouraging the audience to sing the latter track’s refrain “we don’t care.” And he delivered "Ambition," a song he wrote for Iggy Pop's 1980 album "Soldier," with plenty of fire. While he certainly didn’t sound as snotty as Pistols’ frontman Johnny Rotten, he did bring out the songs’ anti-establishment impulses.

In the end, we prefer the plugged versions of the songs to the unplugged versions that Matlock and Sylvain played. But the two guys were so affable during last night’s performance and interview (hard to imagine their bands were once so reviled) that it hardly mattered.