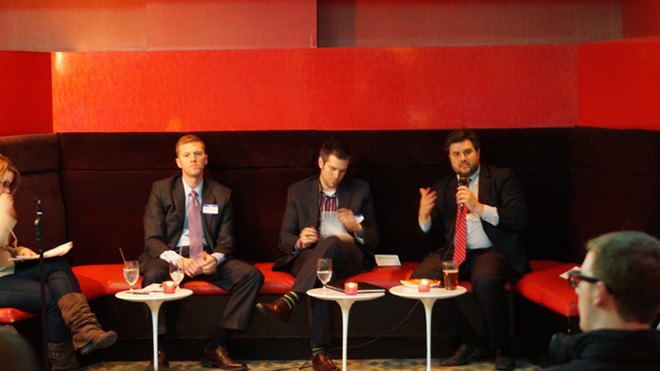 After a spirited sin tax debate at the City Club Tuesday afternoon, in which both the pro- and anti- Issue 7 combatants hammered away at their central talking points, the Greater Cleveland Partnership, Downtown Cleveland Alliance and Cuyahoga County Next Generation Council sponsored a Cleveland Development Discussion at Pickwick and Frolic. The happy hour event was loosely framed as a conversation about how young professionals can get involved in policy decisions. Drink tickets were furnished by the Keep Cleveland Strong campaign.

(Note: I'm honestly not sure of the ethical implications, but in the interest of full disclosure: I enjoyed a Conway's Irish Ale at the campaign's expense).

Three white guys sat on the panel, singing the praises of Cleveland's development momentum and retrofitting most questions to answer by vocally supporting the sin tax, the Opportunity Corridor and other public private partnerships. In fairness, all three spokesmen were articulate ambassadors of the organizations they represent.

Michael Christoff, in particular, a Kent State alum who now works for the design firm Vocon and co-founded the PechaKucha series in 2008, candidly voiced his frustrations with the way that development is sometimes handled in Cleveland. He said that typically, in lieu of vocal opposition, he tries to determine how to make the best of policy decisions for local communities.

"My wife calls me a wimp," he said, but championed the fact that "actual built results" are now cropping up in Northeast Ohio after nearly a decade of fits and starts and uncertainty. Christoff was also wearing a tremendous pair of socks (see above).

"Nothing is going to get done without public/private partnerships," he said. Deemer pointed to the rabid interest for housing downtown and the internationally acclaimed Health Line as notable achievements and said that Cleveland needs to embrace new strategies for downtown development (as opposed to the "trophy investment projects" of the 90s) if it's going to thrive.

"Millenials want transit options," Deemer said, calling the Rapid one of the region's most underutilized assets and agreeing with Marty McGann of the GCP, who said earlier that transit can drive investment from the private sector — defending the Opportunity Corridor.

McGann did his part to rehash the talking points of the GCP regarding the sin tax, mentioning a six-pack of beer in Lorain County (in the same way that Council President Kevin Kelley did at the debate Tuesday afternoon) and urging young professionals to get involved much earlier in policy discussions. As far as the Opportunity Corridor and Issue 7 are concerned, though, McGann said it's "almost too late."

"It's gonna pass," McGann said confidently, when asked about contingency plans if Issue 7 fails. "If not, it'll be uncharted territories for us. This will push a crisis on Cuyahoga County."

Deemer, responding to the same question, said that the short answer was he didn't know. "This is essential. This is mission-critical," he said.