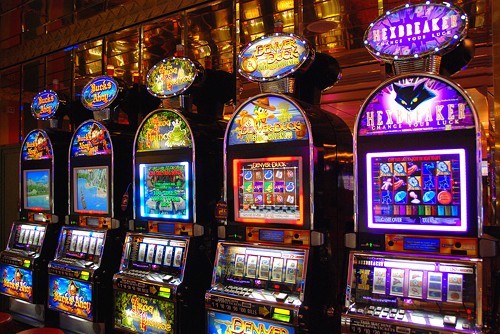 Three Stark County residents were indicted in federal court last week for running illegal casinos in the Canton area and then laundering the cash proceeds into their bank accounts. The trio — Jerry Warren, 70; his daughter, Tracie Warren-Pastore, 45; and Yabacushyanei Bennett, 45 — operated establishments like the Golden Nugget Arcade in Canton, and are accused of hosting more than 200 illegal slot machines.

The cash-only slot machines were profitable in their five years there. The feds say they often made more than $2,000 per day from them, and are looking to seize more than $1.3 million in cash from the defendants, along with four cars: a 2011 Jaguar XJ8, a 2011 Mazda CX-9, a 2008 Land Rover and a 2000 Porsche Boxter.

For more information, you should check out some of the court records embedded below — including the indictment from last week and forfeiture complaint after the business was shut down last summer — and read this well-reported story about the charges from the Columbus Dispatch.

The indictment lists three Ohio slot machine vendors (in Cleveland, Franklin, Miamisburg) the defendants bought from. They tracked around 100 machines they purchased, mostly from the Cleveland location, at about $2,300 a pop.

There are 37 different slot machines names listed in the indictment, each with varying degrees of irony or absurdity. Nothing says “It’s A Blast” quite like sitting in a dimly lit room with constant bells and whistles going off while endlessly transferring cash from your wallet into a machine specifically created to take significantly more money in than it gives out. Let's check out the rankings.

Top five wealth-based slot machine names
-1- Palace of Riches (because nothing portrays royalty like a Canton arcade)
-2- Filthy Rich 2 (because Filthy Rich 1 was such a big hit)
-3- My Rich Uncle (because who doesn’t like to mooch?)
-4- Life of Luxury (because playing the slots is an investment, really)
-5- Enchanted Kingdom (because it’s a slot machine fit for a king)

Top five least-enthusiastic slot names
-1- Lucky Lemmings (because maybe some slot machine players are self-aware)
-2- Lucky Meerkats (because those lil’ fellas are adorable)
-3- Treasure Diver (because who else can relate to that sinking feeling?)
-4- China Emerald (because everybody loves all-you-can eat Chinese food buffets)
-5- Kaboom (because it’ll be a cash explosion, for sure)

Here's the forfeiture complaint the feds filed against the owners last summer.