When shock rocker Marilyn Manson sang disparagingly about the “beautiful people,” he probably had people like Karmin singer Amy Renee Heidemann and multi-instrumentalist Nicholas Louis "Nick" Noonan in mind. They could pass as a real life Barbie and Ken. And yet their model-like looks didn’t keep the dance pop duo from leaving it all on the stage last night at House of Blues during a short but sweet 75-minute set. 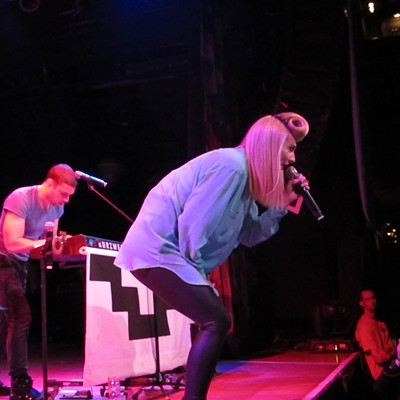 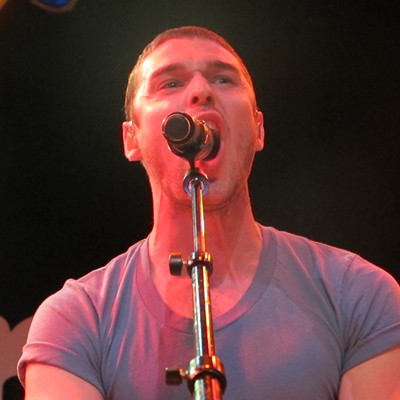 In keeping with the Barbie doll comparison, the sleek and slinky Heidemann looked a bit like a doll in her oversized turquoise shirt and tight black pants. But as she ran onto the stage to the sounds of the opening intro from the band’s full-length debut Pulses, she showed she didn’t just intend to strike a pose. She quickly connected with the small but enthusiastic crowd and then launched into the dance-pop track “I Want It All.” Effortlessly shifting between rapping and singing, she capably simmered down for the ska-influenced, No Doubt-like “What’s In It For Me” and then hammed it for the hit “Acapella,” letting the audience sing the falsetto parts at the song’s conclusion. “You guys are crazier than us,” she told the audience after the particularly fervent response. All the while, the three-piece backing band regulated to the back of the stage proficiently brought the heavily produced songs to life.

The set faltered a bit for the sappy “Neon Love” but then got back on track with the jittery “Gasoline” and the Sublime-like “Try Me On.” “Hate to Love You” began with a sparse intro but then evolved into a celebratory tune with an inspired call-and-response between Heidemann and Noonan, who switched between keyboards, trumpet and drums over the course of the concert. The two-song encore included the band’s cover of the Chris Brown track “Look at Me Now.” This is the song that kind of broke us,” Heidemann said, referring to the popular YouTube video of the duo performing it. They invited two fans on stage to sing the song with them and the two audience members reveled in the moment, delivering it with plenty of enthusiasm. Karmin closed the concert with the poppy “Brokenhearted,” a song that had the crowd signing in unison and put an exclamation mark on the high-energy performance. Sure, the songs tended to be rather saccharine, but give Karmin credit for not letting choreography get in the way of a good time.