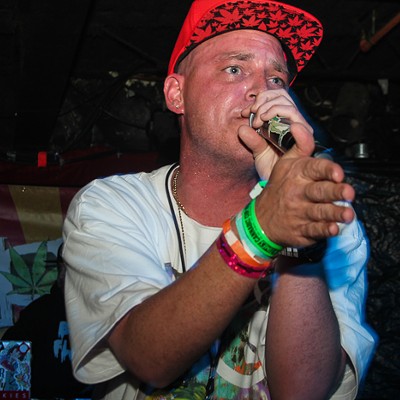 On Saturday night, Devin the Dude and his Buds & Suds Tour rolled into town. Staying true to the name, tall boys of Pabst Blue Ribbon were flowing and a certain kind of smoke lingered in the air of the Grog Shop for a majority of the night. The merch tables were ‎active and the stage was filled with equipment and props for the forthcoming sets. Joining Devin, the show lineup included Blaze 1, J. Hornay, Cool Nutz, Potluck and Berner.

The crowd began to fill in as Blaze 1, J. Hornay and Cool Nutz performed in their respective slots. Marijuana enthusiasts took it upon themselves to spark up and add a little ambiance to the already-intimate venue. The wait for Potluck was a bit extended but the Humboldt County, Calif. duo gave one of the night's best performances. Dual monitors played videos to go along with their high-energy act that eventually ended up spilling into the crowd during "Shut The Fuck Up," the song that closed out the set. ‎Berner stepped to the stage with a small entourage to the side, a fifth of Grey Goose in hand and something to smoke behind his ear before performing songs like "Paradise" and "Drugs" among others, much to the delight of his fans in the crowd.

Another lengthy wait followed, prompting one concertgoer to yell out "Devin, where you at?! You can smoke out here with us!" The spaced-out "Zeldar" began to play as a remote controlled quad copter flew over the crowd. The pilot, who emerged from behind a curtain, was none other than the Dude himself. Flanked by his Coughee Brothaz crew, Devin kicked off his hour-long set‎ with "In My Draws" before getting into fan favorites like "Lacville '79," "Boo Boo'n" and "Just Tryin Ta Live." The latter features Jugg Mugg and Rob Quest (who although blind, took his shades off midperformance). Coughee Brothaz member, Rum, was also given a few minutes to shine. In addition to his popular tunes, Devin also performed a few cuts from his latest album One For The Road. The set initially concluded with "Anythang" and a positive message about accomplishing goals and making dreams come true. Encore chants started to pick up and the fans were treated to quick a cappella renditions of "Almighty Dollar" and "See What I Can Pull" respectively.

By the end of the night, the Grog Shop was a smoked-out and beer-soaked mess. For some, this may have been seen as a bad thing — but at this show, it's more or less a sign of a successful evening and Devin and the rest of the artists performing wouldn't have had it any other way.