Popular in the ’80s, raves were underground concerts that took place in huge warehouses. They featured DJs and rappers, and patrons would often show up in crazy costumes and consume copious amounts of illicit drugs. Eventually, raves went by the wayside as law enforcement officials shut them down. With her current artRAVE: The ARTPOP Ball, Lady Gaga attempts to evoke the spirit of the rave (albeit without condoning the use of drugs, even though the set features the kind of costumes and props that would certainly seem even more surreal after a hit of ecstasy). And judging by the spectacle of last night’s concert in front of a near capacity crowd at Quicken Loans Arena, she’s succeeded in throwing an out-of-bounds dance party. 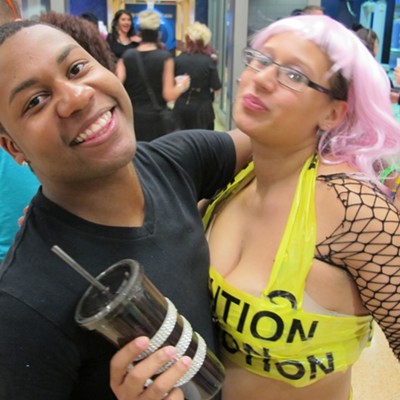 For the opening number “ARTPOP,” the title track from her latest album, Gaga arrived on stage wearing a giant pair of wings. She proceeded to walk along the plexiglass catwalk that extended into the audience as her five-piece band held down the groove while performing inside a Lucite white cave. “Put your fucking hands up,” she screamed. “Tonight, I want you to be 1000 percent you. Will you shine bright with us tonight, Cleveland?” The crowd responded with a huge roar of approval.

Gaga was so intent on endearing herself to the audience that she put on more than one of the hand-made jackets that fans threw on stage. She even read a lengthy letter that one fan threw at her and then invited the fan to join her backstage after the concert for a few drinks. She talked to the audience so much that it was often distracting. But then this concert wasn’t just about the music. Sure, “Just Dance” had a great beat and had audience members dancing and throwing their hands in the air. And Gaga sounded spot-on during a faithful rendition of her big hit “Poker Face.” But her vocals often sounded shrill (and on songs such as “Alejandro,” she relied heavily on a prerecorded vocal track).

Her attempt to deliver “Born this Way” as a piano ballad faltered even though her voice sounded surprisingly soulful during the rendition. She slipped into a new costume on stage for the rowdy “Bad Romance” — it was a great moment that lifted the veil of the show for a momentary glimpse at the person behind the mask. But then, it was back on and she kept that energy going strong on “Applause” as she and her cadre of dancers donned outfits that resembled dayglo raincoats. Toward the two-hour concert’s end, Gaga described herself as a “fucking kid from New York City” who was told she wouldn’t go anywhere in life because her voice was too “theatrical.” She’s certainly proved those critics wrong. But it’s unclear where she goes from here — the ARTPOP songs clearly didn’t connect with the crowd as well as songs from 2011’s Born this Way, suggesting Gaga might not have the staying power of predecessors such as Cher and Madonna. But for the time being, she makes a pretty damn good party host.