“I’m Tim and these are my boys,” said country singer Tim McGraw early in last night’s two-hour show before close to 20,000 fans at Blossom Music Center. “We don’t bullshit a whole lot. We just like to play music.” That sentiment rang true throughout the set as McGraw and his 8-piece band showed off their versatility, shifting from fist-raising anthems to introspective ballads. At a time when country music seems to be all about drinking and partying (and with songs such as “Mexicoma,” McGraw is guilty of pushing that philosophy too), it was refreshing to see McGraw tone things down a bit. 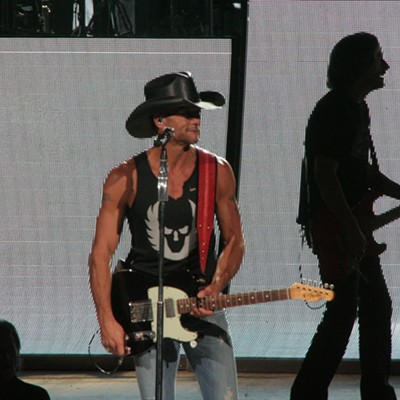 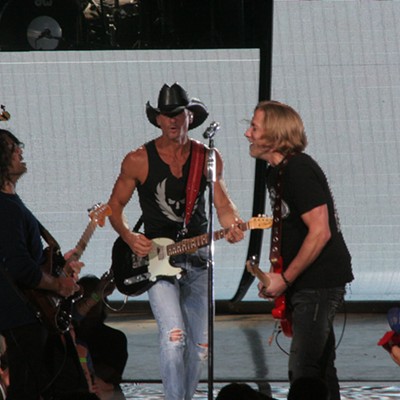 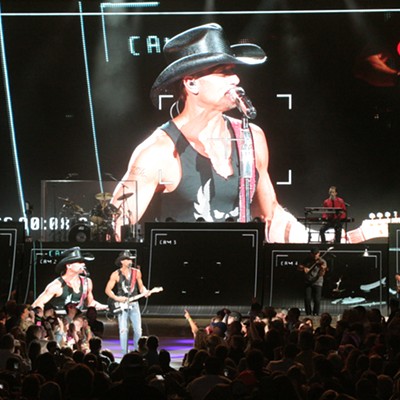 Like he did to start last year’s concert at Blossom, McGraw waded through the audience, making his way from the back of the pavilion to the stage to start the show. He opened the concert with the poppy “One of Those Nights,” but then turned up the twang for the catchy “I Like, I Love It” and then simmered down for the ballad “Red Ragtop.” Regularly hoisting his arms above his head to flex the muscles that popped out of his black tank top, McGraw pranced the length of the stage and constantly slapped high fives with the patrons crammed into the pit at the front of the stage. For “Better than I Used to Be,” a track that put the fiddle up front in the sound mix, old photos and videos of McGraw — who wasn’t so burly back in the day — showed on the video screen, lending an intimacy to the ballad and making it seem as if the guy was showing us his private home movies. McGraw really enjoyed the interaction with fans, and he sat on the extensive catwalk to play acoustic guitar and sing a rendition of “You Are So Beautiful,” a song he dedicated to his daughters. The performance seemed more like something you’d save for the confines of your home, but McGraw didn’t seem too concerned about coming off as a doting dad. While his voice sounded a bit rough at times (especially during the ballads), McGraw’s energy never waned and he delivered hits such as “Highway Don’t Care,” which featured Taylor Swift on a prerecorded backing track, and “Where the Green Grass Grows,” one of his best anthems, with plenty of gusto. Even “Overrated” and “City Lights,” new songs from a forthcoming studio album due out in the fall, sounded sharp.

Singer-guitarist Kip Moore opened with a rowdy 45-minute that veered more toward redneck rock than country pop, especially when his long-haired guitarists would stand atop risers to unleash their fierce solos. Mid-way through the set, he even said he was trying to “wake y’all up.” “We spend so much time worrying,” he said. “Let your hair down.” By set’s end, he accomplished his mission.