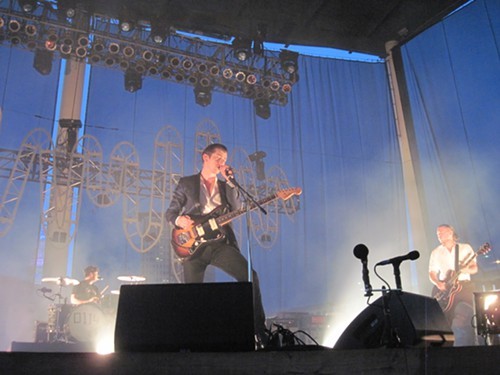 The words "eerie" and "ghoulish" came to mind on more than one occasion at last night's Arctic Monkeys show at the clumsily named Jacobs Pavilion at Nautica. And not for nothing: The smoke-and-lights intro into "Do I Wanna Know?" set the stage for an evening of the very present-day Arctic Monkeys. Following 2009's Humbug, the band has embarked on a mission of tying its desert rock ethos to, like, a contemporary rock vibe, and the effort has paid dividends. The show last night was sold out. And, anymore, you can't turn around without hearing a nod to the Monkeys' latest outing, AM. They're everywhere.

Including, duh, Nautica, where they dished up a concert in the vein of straight-up rock 'n' roll. There was ego aplenty onstage, and the light show melded perfectly with the ghostly tones washing across the audience. For fans, this was the Cleveland show we've all been deserving since the band opened for the Black Keys a few years ago and phoned in a mundane set at the Q. Frontman Alex Turner was tuned in last night.

Highlights included "505," "Crying Lightning," "No. 1 Party Anthem" (which I totally missed in my willful avoidance of the new album), and "Brianstorm," batting cleanup and kicking ass.

The band did a fine job of skipping around its repertoire, focusing mostly on AM, of course, but also kicking around some of the more beloved tunes from earlier albums. I thought it was interesting that they dropped "I Bet You Look Good on the Dancefloor" in the middle of the set, which sort of signified that the band's first signature song has simply blended into its canon at this point.

When they fired up "Do I Wanna Know?" the crowd went absolutely nuts; that guitar riff has become a modern classic since last fall. The band's new defining moment, as it were. Throughout that song, smoke drifted across the stage and the band members loomed mysteriously. Right at the last note, the back of the stage lit up with the sound wave image from the album cover.

Via that killer welcome and the entirety of the show, the crowd never let up. "Enthusiasm" was probably the third word that kept coming to mind.

Last note: The line to buy merchandise was at least a mile long after the show. I've never seen anything like it.

Do I Wanna Know?
Snap Out of It
Arabella
Brianstorm
Don't Sit Down 'Cause I've Moved Your Chair
Dancing Shoes
Library Pictures
Crying Lightning
My Propeller
Why'd You Only Call Me When You're High?
Knee Socks
I Bet You Look Good on the Dancefloor
No. 1 Party Anthem
Fireside
Suck It and See
Fluorescent Adolescent
505

Encore:
One for the Road
I Wanna Be Yours
R U Mine?