Photos: The Joys and Pains of Local Croatian Fans During the World Cup

Croatia was knocked out of the World Cup yesterday, but it wasn't due to lack of support from the massive Croatian community in towns like Eastlake and Willoughby. Scene joined Croatia fans for both the World Cup's opening match on June 12 and their third and final game on June 23.

Here's Sam Allard's piece from when we visited High Point Restaurant & Bar for their opening match against heavily favored Brazil, the tournament's host country (pictures 1-8 in the slideshow below). On Monday, I visited the American-Croatian Lodge, watching the must-win game projected on a large blow-up screen in the pavilion with a packed crowd of Croatian-American soccer fans and families (pictures 9-19).

Perhaps Scene's presence brought a bit of bad luck: the two games we watched with them, the Croatian squad lost to Brazil and Mexico, both by a score of 3-1. The game we didn't attend, the second match against Cameroon, Croatia won 4-0. Because they didn't beat Mexico yesterday, Croatia is officially out of the World Cup.

Check out our photos here: 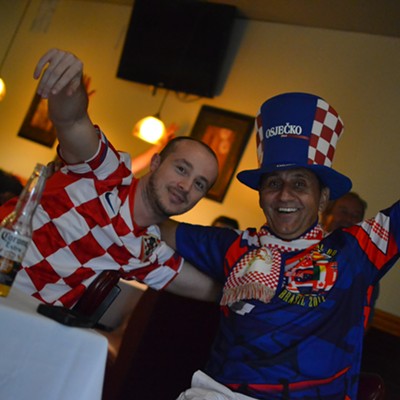