Music Awards ceremonies can be rather formal affairs with rock stars dressed up in tuxes and designer dresses. Not the inaugural Alternative Press Music Awards, which took place last night at Voinovich Park behind the Rock and Roll Hall of Fame and Museum. The irreverent event launched with a red carpet meet-and-greet in front of the Rock Hall. Starting in the late afternoon, several hundred teens gathered to catch a glimpse of celebrities such as Paramore singer Hayley Williams (who looked great with bright blue hair), Slash (who, of course, wore his signature hat) and the Misfits (who were decked out in make-up and cartoonish outfits) as they walked to the event. 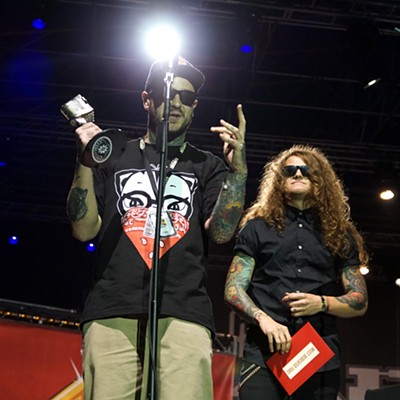 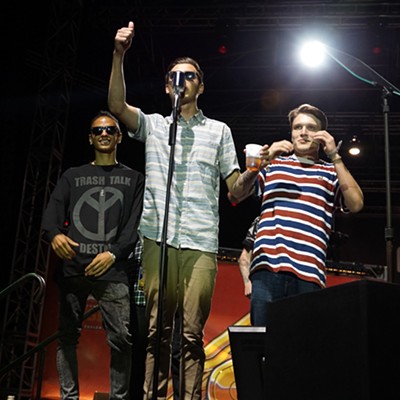 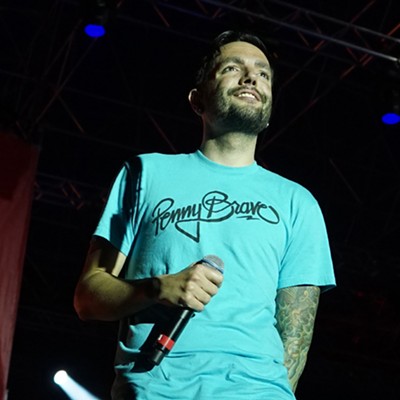 The awards itself took place in the early evening as Panic! at the Disco singer Brendon Urie opened the show with a medley of Frank Sinatra tunes. Dressed in a gold jacket and plastic pants, he crooned and swooned with backing from Cleveland’s Contemporary Youth Orchestra. His vocals sounded just like Sinatra's too. In the wake of his performance, rapper Ice-T, christened chief of security for the event, arrived on stage with two of his bulldogs. He jokingly laid down a few ground rules. “Make sure you behave and shit,” he said. And if any performer wasn’t present to accept his or her award? “I will personally throw that shit in the middle of the goddamn lake,” he warned. It was a great intro to the four-hour event that featured an awards ceremony and performances by many of the nominated bands.

A real smart aleck whose musical legacy practically gives him the right to make fun of other bands, Blink-182’s Mark Hoppus served as a MC for the event. He would routinely drop jokes into his script all night long as he introduced the variety of guest presenters and performers. A few musical highlights: Asking Alexandria delivered a rousing cover of Duran Duran’s “Hungry Like the Wolf” and turned the song into a pop-punk anthem by cranking up the guitars; Ice-T held nothing back during the nasty rap/metal number “There Goes the Neighborhood” that he delivered with the guys from Body Count; Joan Jett capably teamed up with Against Me! singer Laura Jane Grace on the poppy “Soulmates to Strangers” and with Slash on a cover of the Rolling Stones number “Star Star.” Local hero Billy Crooked of the punk band the Vacancies also joined the raspy-voiced singer as she sang her prickly hit “Bad Reputation.” The combination of old alternative rock stars and up-and-coming punk acts didn’t always work. Black Veil Brides singer Andy Biersack couldn’t make the Misfits songs “Dig Up Her Bones,” “Die Die My Darling” and “We Are 138” overcome their Spinal Tap-like tendencies — with the falsetto vocals, the songs simply sounded like parodies of old heavy metal tunes. Still, this was a star-studded event that will hopefully become a regular event. And many of the artists — Slash, Joan Jett and Billy Corgan, in particular — seemed truly honored to be included in an event that catered to the musical tastes of tweens and teens.

The following is a full list of all APMA award winners: