Some stars turn bitter when only a portion of their discography is regularly recognized. Not singer-songwriter Matthew Sweet. Last night, Sweet tore through a raucous set at the Beachland Ballroom, pulling largely from his most commercially successful release, Girlfriend. Sweet and his touring band have spent the past several years banging out tracks exclusively from Girlfriend the band simply seems to have fun playing the tracks that fans want to hear. 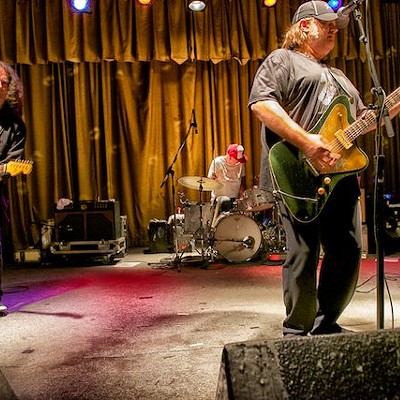 Sweet and his band that consisted of Velvet Crush’s Ric Menck and Paul Chastain as well as Dennis Taylor played for a dense crowd of incredibly knowledgeable fans. Throughout the set, patrons demonstrated their love for Sweet’s many releases, matching him word for word on relatively deep album cuts like the rocker “Someone to Pull the Trigger” from 1993’s Altered Beast.

Sweet effortlessly plunged through his discography — readily recognizable cuts and more obscure picks all the same — with a sort of intensity that refreshingly reframed each tune. Sweet’s appearance was a fascinating juxtaposition to his power pop sound as he wore a black Under Armour brand baseball cap and was dressed from head to foot in black workout gear.

The night’s opener, power pop legend Tommy Keene, joined the main act onstage for “I’ve Been Waiting,” the second cut from Girlfriend and an excellent pick for Keene’s masterful pop rock vocal chops. After a few minutes of watching Keene jollily romp around onstage with Sweet’s band, it became pretty evident that whatever satisfaction the audience was deriving from hearing the songs it knew best was vastly overshadowed by the sheer amount of fun the entire band was having.

After Keene left the stage, Sweet and his bandmates kicked into a highly anticipated rendition of “Girlfriend,” giving their eager fans the opportunity to shout out the words to a ‘90s alt-radio all-time classic. When Sweet finally left the stage a little bit before midnight, after returning not once, but twice, for the excited crowd, he simply thanked the crowd and concluded the show, effectively leaving the impression that he truly is a man of few words and many power chords.