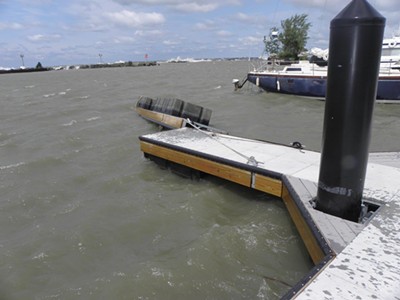 Scene wrote an in-depth story earlier this year attempting to clarify why exactly the flimsy new floating docks at Edgewater Marina may represent not only a waste of money, but a very serious safety hazard.

The floating docks were constructed too quickly after Superstorm Sandy with less-than-optimal materials and less-than-unimpeachable bidding/contracting tactics (if we’re going to paint the picture in pastels).

Upshot: The docks remain structurally insufficient to withstand the waves in the marina’s basin without a reinforced break wall. The international engineering firm URS Corp. was expected to secure the repair bid, but that work won’t begin in earnest for some time.

To skeptics and industry professionals who have been blasting the Ohio Department of Natural Resources with concerns for most of 2014, the destruction of the floating docks has been perceived and portrayed as only a matter of time.

So Monday evening’s heavy winds, during which the floating docks sustained some minor cosmetic damage, was something of an “I told you so” moment. Though no boats were damaged, a few lines broke, one boat was blown from its moorings, and a portion of one dock was overturned in the waves.

“Our biggest problem is that some of the boat owners don’t use big enough lines,” said Anne McCarthy, Edgewater Marina’s office manager, in a phone interview with Scene. “We’ve told them, ‘Put the biggest line that your boat will hold.’ Some of these people are using, like, clotheslines.”

“We tell these people over and over and over,” said McCarthy. “Just this morning, after walking the docks, we decided we’re going to put up a sign.” McCarthy said she’s not nervous for storm season, and that if the owners are responsible, the marina should be fine.

Monday’s damage wasn’t serious by any stretch, but it’s a reminder of the docks’ perilous situation. Kenneth Kabb, an attorney and sailor and member of the Edgewater Yacht Club who was on the water Monday afternoon, estimated that winds were blowing at 20-25 mph.

“That’s pretty typical for Edgewater in the spring and fall,” Kabb said. “And if there’s even minor damage at 25, it’s going to be horrendous when winds pick up. Force is square to wind speed. It’s not linear.”

A spokesperson for MariCorps US, the St. Louis company that designed the floating docks, remained aggressively unavailable during Scene’s reporting. Previous ODNR materials describe the docks as being able to withstand “one foot continuous waves and waves up to 2.5 feet for a duration of four hours.” During Sandy, for perspective, the Edgewater Marina was battered by 4-plus foot waves for more than 24 consecutive hours.

Regarding immediate improvements and ongoing safety precautions, the feckless Ohio Department of Natural Resources media folks provided no comment. Though they were reportedly responsive to the marina’s request for aid Monday, they have publicly acknowledged that this whole project is a massive “calculated risk,” and they generally keep quiet when asked to elaborate.

That hasn’t sat well with State Rep Nickie Antonio, who’s remained diplomatically “concerned” through the proceedings. She held a community meeting in April to gather information about the project, one which ODNR did not attend, and spoke to Scene Tuesday from her car en route to the marina herself.

“My primary concern, after health and safety,” said Antonio, “is the appropriate allocation of taxpayer dollars. Taxpayers always end up being on the hook. Are the taxpayers going to be responsible again. And if so, how many times?”