August 16, 2014 at 3:48 PM
comment
For most people, Survivor is probably best known as that “Eye of the Tiger” band. Certainly, the group, led these days by founding guitarist Frankie Sullivan has been happy to trade on the legacy of the song, which found a huge worldwide audience, thanks to its feature placement in the movie Rocky III in the ’80s. “Eye” has popped up many places since then, including a Starbucks commercial in recent years and earlier this year, a video went viral of a cover version of the song, recreated using a dot matrix printer. You can’t make this stuff up. 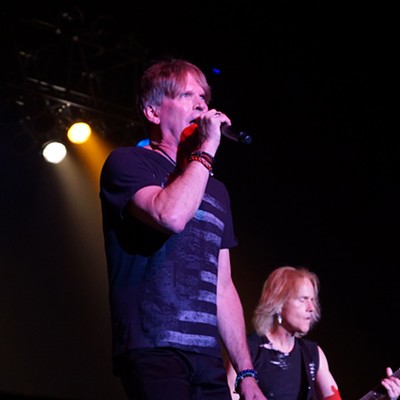 
But the Chicago-born group went deeper than that, with a healthy stack of hits spread across two distinctly different eras. Last night at Hard Rock Live, fans got a unique chance to hear music from the entire history of the band, performed by a lineup featuring both of the group’s lead singers. Fans who have followed Survivor’s career over the years probably never even thought of the possibility that Dave Bickler and Jimi Jamison might one day share the same stage, but that’s exactly what happened when Sullivan quietly added Bickler to the group’s lineup only a few days before they played a show in Toledo last year. Bickler, who sang on the first four Survivor albums, including Eye of the Tiger, has been more familiar over the past 20 years as the singing voice in the Budweiser Real Men of Genius commercials. His vocals on the Survivor albums had a rugged blue-collar feel that came ripped straight from the very same streets he sang about. Memphis boy Jimi Jamison brought a husky and more soulful vocal style to the group when he joined for 1984’s Vital Signs; his voice had a little bit more FM radio-esque polish that would make it easier for the group to get its material on the charts.

Or perhaps it was just simply good timing. Keyboardist Jim Peterik (who left the band in the early ’90s) and Sullivan had amassed four albums worth of solid material by the time Jamison joined the group. Without question, the vocalist switch gave the pair an exciting new dynamic to work with when it came to songwriting. As last night’s show demonstrated, Survivor ultimately built an impressive catalog of hits across those two periods and the span of seven albums. The material, whether it came from the Bickler or Jamison era, had distinctive threads of connection that made it all sound cohesively like Survivor music. A lot of that came down to Sullivan’s guitar work, which tied it all together. Rarely, was he at a loss for a riff or a solo, something that was demonstrated by the band’s set, which featured 12 songs across a 90-minute time span. A bluesy bit of interplay between Sullivan and his son, drummer Ryan Sullivan (subbing in for original drummer Marc Droubay) went for about eight minutes leading into a performance of the classic “I Can’t Hold Back.” Realistically, the jamming on the songs probably could have been scaled back a bit, allowing time for a few more songs. While Ryan Sullivan was a solid replacement for Droubay behind the kit, the powerful presence and passion of Droubay was still a bit of a missing link.

Bickler and Jamison shared the stage, with the set list alternating equally between tracks from each era, one by one. It was a part of the show that felt a little bit like it’s still being worked out. While neither singer seemed uncomfortable, it didn’t exactly feel comfortable. Jamison would often exit the stage during songs sung by Bickler and vice versa. They were at their best when they were sharing the stage together, as they did on “Broken Promises,” with Jamison, the original vocalist on the track, trading lead vocals with Bickler. Their shared harmonies blended well and “Take You On A Saturday,” an album cut from 1981’s Premonition, would have been a perfect match with Jamison’s voice, but instead, he left Bickler to tackle the track on his own.

But for many fans, it’s just cool to see the two singers sharing the stage at all — it’s an opportunity to hear songs from both eras as performed by the original voices that sang them, something which as mentioned earlier, never would have seemed like a remote possibility. There’s no doubt that given some more time, it’s likely that they’ll work that part of the chemistry out. In the end, it was about the songs and Survivor would leave no stone unturned when it came to the hits, serving up all of the biggest numbers — “High On You,” “The Search Is Over,” Rocky IV’s “Burning Heart” and even “Rockin’ Into the Night,” a Peterik/Sullivan co-write that missed the first Survivor album, but became an important early hit for .38 Special. By the time “Eye Of The Tiger” wrapped it all up, it had been a great evening in the ’80s time machine for crowd at Hard Rock Live. Survivor proved that they’ve done their time and took their chances; they have a nice catalog of hits that people still love and remember.