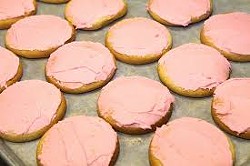 The Chronicle-Telegram wrote the obituary this morning: Elyria's legendary pink cookies, cookies that were dubbed the best cafeteria cookies in the region by Cleveland Magazine in 2009, are no more.

Government regulations that require more fruits and vegetables (and less sugar and fat) in school lunches haven't given cafeteria folks much wiggle room.

"The guidelines are very strict," food services director Scott Teaman told reporter Lisa Robertson before approaching what sure sounded like the verge of tears:

“We could modify the recipe by changing the size, using whole-grain flour or putting on less icing, but in doing that you are not making the same cookies,” he said. “There is only one way to do the pink cookie, and to do it any other way would not do it justice.”

It most certainly would not! The cookies originated at Elyria's Link's Bakery and then became a staple at the cafeteria, where students wolfed down more than 50 dozen per week at a cost of $.50 a piece. Non-students could even purchase them by the dozen, Cleveland Magazine reported.

For now, the integrity and buttery goodness of the pink cookie will live on only in memory. And for many Elyria grads, the memories are dear.

Britta Will is now 28. She attended Northwood Junior High in Elyria back in the 90s, and when I contacted her about the pink cookies' abrupt demise — she's a good friend — she said that they were "synonymous with childhood" in Elyria.

"They were the perfect cookie," Will wrote by email. "Super soft, and yet not as sweet as you'd expect them to be with such a pastel pink color of icing. The texture of those Lofthouse cookies without the immediate certainty that it had given you diabetes."

Will said she used to crave them after she left home for college and said many of her Elyria friends have expressed the same sentiment.  She said that even when she tried to make them at home — complete with sour cream, the secret ingredient identified by the Chronicle-Telegram — it wasn't the same.

"The taste just wasn't right," Will wrote. "Or maybe it was that the ritual of unwrapping the thin plastic bag wasn't there."

UPDATE: Joyce Davis, the Lorain County Health Department's PIO, spoke by phone with Scene and said that these federal regulations are made "with good intentions," even if Elyria folks are saddened by them. She also directed us to the Lorain County Health Assessment, which showed that in 2011 — the report was released in summer, 2012 — 14 percent of Lorain County Children were obese compared to 15 percent across Ohio and 13 percent nationwide.