51 Cleveland Investors Swindled Out of Millions by Young Mexican Entrepreneur 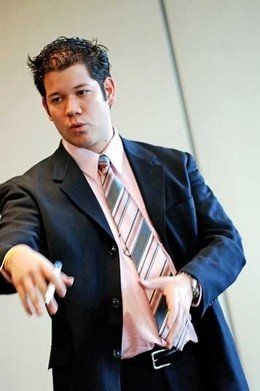 Yong Mexican entrepreneur Oscar Villarreal was too good to be true. Painted as a prodigy in the Cleveland business press, the charismatic Villarreal, now 29, was the sort of fresh-faced climber that enamors (all too easily, it appears) Cleveland's corporate elite.

Paying a group of six initial investors a 30 percent return to induce their buddies to follow suit, Villarreal promised untold sums from his fabricated "oil, petroleum, steel and other"  industry connections, sums which the local investors never roused themselves to question the ethics or legitimacy of. (Oil in Mexico? Sounds legal!)

The enterprising Villarreal endeared himself to the elite by moving to Gates Mills, joining the cultural boards they all sat on and even hosting a reception for the International Piano Competition at his home.  (Villarreal was a pianist of prodigious talent in Madrid, wrote Crain's).

But when some of the investors started making noise last September — initially reported by the NEOMG — the Securities and Exchange Commission launched a full-scale inquiry. They've now handed down the ruling: Villarreal was a fraud. He swindled $18 million, all told, from 51 investors to play around on the stock market, pay off credit card debt, buy a luxury car, and gamble on a slew of international funds unrelated to his own.

The full SEC Litigation Release is available here. The Commission's complaint, to give you an idea of the language,  "seeks a permanent injunction, disgorgement of ill-gotten gains plus prejudgment interest, and civil penalties."

For the time being, Villarreal has decamped to Mexico. And his Cleveland boosterism, the type this town's narrative-makers really go ga ga for — he considered "stealing" a young professional from Chicago one of his greatest early accomplishments, for example — may only have been a ruse.